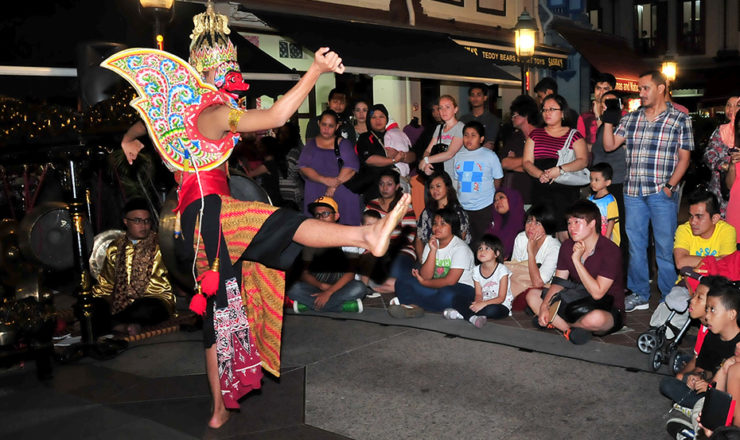 Kampong Gelam is an historical precinct that was originally conceived by Sir. Stamford Raffles to be a settlement area for the Malay, Arab, and Bugis communities in Singapore. In 1989, the core area of Kampong Gelam was gazetted for conservation by the Urban Redevelopment Authority. Today, the historical precinct continues to retain a strong Malay and Muslim identity with both traditional and modern trades attracting locals and foreign tourists alike.

Located at the heart of Kampong Gelam is the Malay Heritage Centre, a heritage institution managed by the National Heritage Board. The center serves as a showcase of Malay heritage and culture in Singapore, as a focal point for the Malay community in Singapore and a place-maker for the historical precinct. It also presents exhibitions and programs that showcase the intangible cultural heritage (ICH) of the various sub-communities within the wider Malay community.

In 2011, the Malay Heritage Centre conceptualized and introduced its signature program known as Neighbourhood Sketches. Neighbourhood Sketches is a series of regular outdoor performances held within Kampong Gelam. The program brings the rich and diverse ICH art forms of the Malay community closer to the public through regular street performances outside the walls of the center.

When curating performances for Neighbourhood Sketches, the Malay Heritage Centre makes a conscious effort to showcase a broad range of ICH art forms practiced by and associated with the Malay community. In addition to staging performances, the center ensures that key characteristics of each art form are shared with the audience during every performance and, where applicable, interactive segments involving audience participation are also included.

In addition, the Malay Heritage Centre records performances staged as part of Neighbourhood Sketches as a means of documenting the ICH art forms presented. The centre also leverages on technology to promote the performances to raise public awareness and uses social media platforms such as Facebook Live to broadcast these performances so that they are able to reach out to a wider audience.

Thus far, Neighbourhood Sketches has received an overwhelmingly positive response, and the majority of the audience members surveyed requested more performances as well as certain other ICH art forms to be presented. In addition, 95 percent of the audience members agreed that watching the performances contributed to a better understanding and appreciation of Malay arts, culture, and heritage.

It is worth noting that the ICH practitioners who participated in Neighbourhood Sketches have also enjoyed being part of the program. In fact, many of these ICH practitioners were grateful for the opportunity to showcase their craft to a wider audience and informed the Malay Heritage Centre that they felt a stronger sense of pride as ICH bearers after participating.

Besides showcasing the cultural expressions, practices, and art forms of the Malay community, the performances of Neighbourhood Sketches also serve to educate and entertain visitors to Kampong Gelam. In doing so, they contribute to the overall cultural vibrancy of the historical precinct by activating its streets by presenting performances that are engaging and reflective and respectful of the precinct’s identity, culture, and heritage.