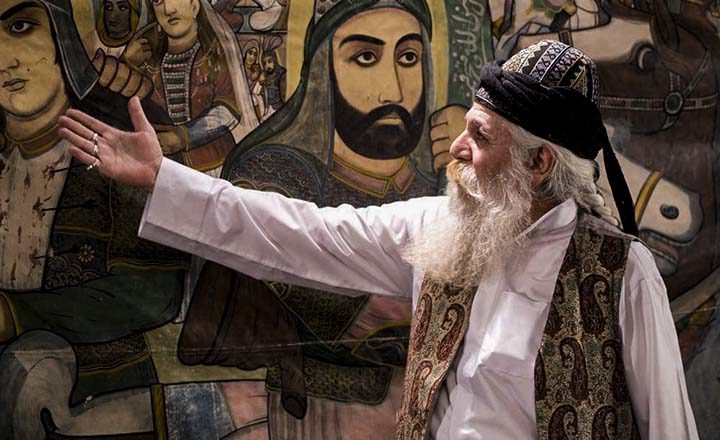 Narration of Persia--2005 Department of Traditional Arts ICHHTO Research Center, Morshed Ahadi points to the part of the screen he is reciting its story

Through the rich history of Persia, few cultural elements have remained intact, one of which is the art of narration. Ever since Aryans entered the plateau of Iran, they brought this way of performance art with themselves through which they would tell the stories of their ancestors and later the epics of their gods.

This play, which is a combination of narrating, solo-acting, singing, and an improvisation performance, is done in two ways: Open-Space (at squares, passages, farmlands, etc.) through which the stories were drawn on a scroll curtain that would be opened slowly in front of the audience, and Closed-Space (in coffee houses or mansions) in which the curtain was hung or mounted on a wall before the performance and covered by a contrast curtain to be removed from the main curtain when the narration starts.

The influence of this art was so great that it was used to motivate and encourage the army, and in the Safavid era, it was highly valued.

The Elements of Scene Reading

The main parts of this way of performance are:

This curtain is a piece of fabric on which scenes of mythological stories, historical narratives, and even stories of the great prophet’s lives are drawn. There’s a believe that says seventy-two stories are drawn on the curtain but in reality, it does not include exactly that many. This belief is created in terms of the multiple stories and the large number of the images. It is on connection with this belief that a famous conversation happens in between the narrator and the audience; The narrator may ask, “how many stories and faces are drawn on the curtain?” and the audience replies “366 faces and 72 stories.”

Besides all these, the positioning of the characters is determined by their rank. If it’s the narration of a war, the soldiers are drawn smaller, without the usage of perspective or anti-perspective. The commander, the prince or, the king is drawn slightly bigger to show the distinction, which also includes their horses and ammunition. This illustration of the characters must be included and drawn stereotypically, and to give emotion to the characters, their body language is also drawn in such spectacularly, showing the feeling of pain or death. The characters are mostly painted with Qajar-style clothes. Even the emotion that lies within their eyes is uniquely painted; like if they show power or their weakness, if it’s comforting or terrifying, it is drawn in a realistically.

He is the person who tells the stories drawn on the scene. A singer and actor—someone with high physical ability and excellent creativity in improvisation who, with the usage of the stories, can play the role of all the characters.

Now that’s the time when the magic happens—the narrator walks between the curtain and the audience, acting out each character, singing the poems and epic songs and telling the painted stories. As his voice tonnage changes and plays out the narrations with his hands and using his stick, and the moves he makes with his body, takes the audience deep into the scene, where the events are happening. All of a sudden, the audience feel no border between them and the scene, finding themselves in depth of the story, playing the role of one of the characters.