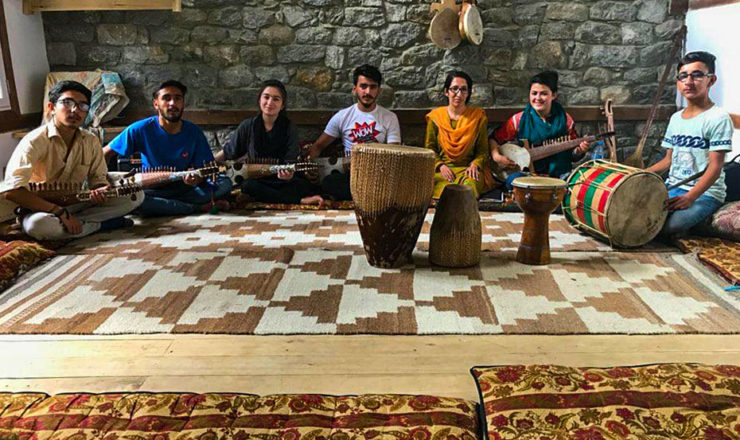 Music occupies a significant position as intangible cultural heritage. In fact, 56 out of 470 cultural practices and expressions on the UNESCO Lists from 2008 to 2017 can be categorized as music; it should be noted as well that many elements on the Lists are performed with musical accompaniment, such as folk dances and traditional games. Music has helped generations circulate traditional knowledge not only for continuity but also for social cohesion and intergenerational solidarity.

The power of music lies on its capacity to enthrall, connect people, and emphasize—from a sense of shared belonging and repetitive participation—a community or a group of people not to be mistaken as homogenous but rather compelled by various thoughts and inclined to music-related activities for different purposes. This is particularly true for the Leif Larsen Music Centre, one of the flagship programs of Ciqam, a project of the Aga Khan Cultural Services Pakistan. Ciqam (a Burushaski word meaning “prosperity”) was established in Hunza district to provide income-generating opportunities to empower people, more specifically women and the youth, in Gilgit-Baltistan and Chitral, the northern region of Pakistan. Formerly known as Community Music Centre, Leif Larsen Music Centre is named after a Norwegian ambassador, Leif Holger Larsen, who was supposed to visit the facility in May 2015, but regrettably the plane he was boarded on crashed on the way. He was a key figure in the process of realizing the initiative.

At present, there are thirty-five musicians at the Centre; twelve are considered the core team or those whose knowledge on music from the region is sufficient to train others; all of them are young people. Two common attributes among the young musicians are (1) their interest in producing and disseminating local music culture and (2) their experience of economic marginalization. While the Centre provides free informal music education, and through that and other related activities safeguards intangible cultural heritage, it also supports the musicians’ annual tuition fees in their respective formal school, books, and uniform. The Centre’s humanitarian aim, particularly to find ways for people in this region to overcome poverty and gain livelihoods, is strongly commendable because at the same time central to it is valuation of heritage.

Unlike in other postcolonial countries, music in Pakistan remains to be resistant to Western influences. People generally appreciate locally produced music, nostalgic songs that find their roots in the time and imagination before the rupture of the Indian subcontinent, i.e. separation of India and Pakistan. This strong enthusiasm for the local is reflected in the kind of music created and transmitted at the Leif Larsen Music Centre. Through the efforts of women working at Ciqam, they produce their own traditional musical instruments such as rubab, sitar, chaarda, zigini, tumbak, and daf. Furthermore, their musicians’ repertoire is based on local languages such as Burushaski, Wakhi, Shina, Khuwar, and Balti. This is meaningful in terms of symbolically enabling the people of Gilgit-Baltistan and Chitral, considering that their safeguarding efforts are situated in a challenging time. Nevertheless, the musicians and cultural managers at the Centre and largely at Ciqam continuously work in pursuit of gender equality, affirmative action, and poverty alleviation. Their laudable grassroots effort is a strong testament to the possibility of intangible cultural heritage as a vehicle for sustainable development.