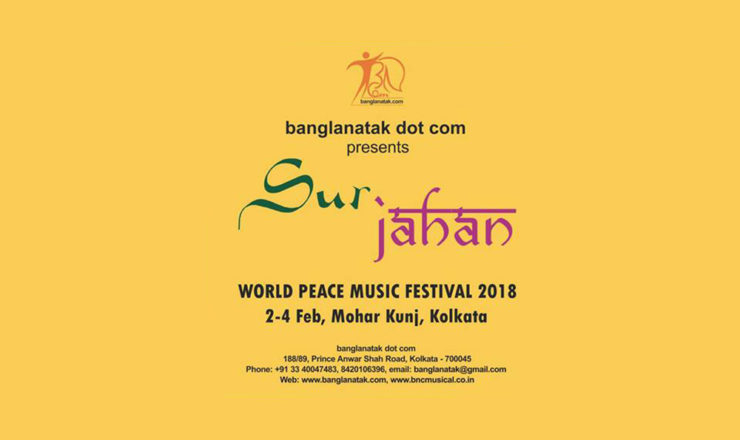 The eighth World Peace Music Festival Sur Jahan will be held from 2 to 4 February in Kolkata and from 7 to 9 February 2018 in Goa, India. Sur Jahan started in 2011 as Sufi Sutra in Kolkata. Sufi means “a Muslim ascetic and mystic,” and sutra “a rule or aphorism” in Sanskrit literature or “a set of these rules on a technical subject.” So Sufi Sutra is a set of Muslim ascetics (folklore musicians). However, as the festival rose in popularity and more bands from other countries sought participation, internal voices came to change the festival’s name to match its cultural diversity. It was then renamed to Sur Jahan to reflect the wide range of music genres it curates, with sur meaning “music” and jahan “the world” in Hindi, Bengali, and Urdu—several of the subcontinent’s languages—and so Sur Jahan can be translated as “music of the world.”

With the name change, the festival is working to embody the spirit cultural plurality in music. This year’s festival includes five teams from Italy, Senegal, Hungary, Poland, and Finland as well as two domestic Indian teams. Among the five international groups, one is led by WOMEX Lifetime Award recipient Cheikh Lo of Senegal. The other teams include the globally acclaimed Atse Tewodros Project, an Ethiopian and Italian fusion folk band; Hungary’s renowned folk music team Muzsikas; Poland’s Muzykanci, representing the best of Polish folk music; and Tuuletar, an all-women Finnish band named after the Finnish goddess of the wind. Bengali bands will share the stage alongside the international teams. In addition, there will be a special showcase of rural crafts and cultural hubs in Kolkata. Handicraft stalls will be assembled in Kolkata while national teams will perform traditional folk music in Goa.

The festival format is contoured by one daytime workshop and one evening concert for each international band in both venues. The workshops are known for their festive atmosphere. They provide a platform for the participating international teams to interact with local musical talents and audiences. With international media covering the event and more features, there are high expectations and more interest in the eighth World Peace Music Festival Sur Jahan.

It is a non-commercial, non-ticketed festival presented under the motto ‘Music for Peace, Music for All’. More information about the festival is available on its facebook page, on banglanatak.com, and through a downloadable brochure