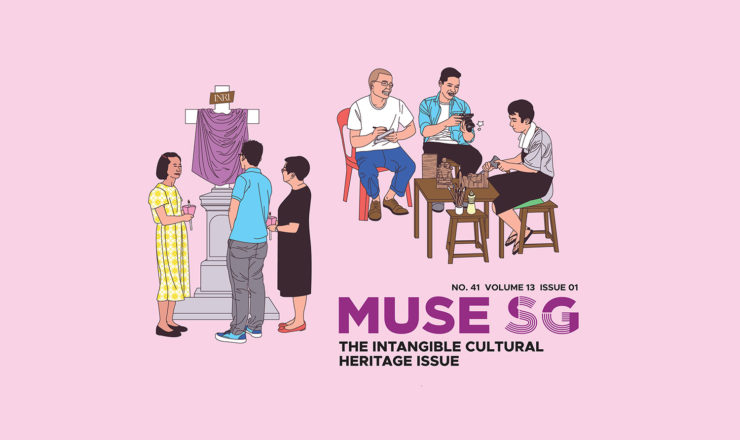 The National Heritage Board of Singapore (NHB) recently published the first issue of a two-part series of MUSE SG that focuses solely on Singapore’s intangible cultural heritage (ICH). MUSE SG is NHB’s outreach magazine that features museum and heritage related articles and is distributed to museums, schools, libraries, and public institutions free-of-charge.

For the two-part series on Singapore’s ICH, NHB has partnered with History Society students from the National University of Singapore (NUS HISSOC) to conduct research and co-create content. The partnership is part of NHB’s youth engagement efforts to interest the younger generation in different aspects of Singapore’s heritage.

The first ICH issue of MUSE SG introduces readers to the different categories of ICH as defined by UNESCO and explains how the ICH elements in these categories have become an integral part of Singapore’s multicultural identity. The issue is part of NHB’s continuing efforts to promote greater public awareness and appreciation of Singapore’s ICH.

It also features articles on selected ICH elements including traditional Malay dance, traditional Eurasian cuisine, traditional crafts such as effigy making, the production of soya sauce, the practice of rearing songbirds, the ancient healing practice of Ayurveda, and local practices in the commemoration of Easter.

The second ICH issue of MUSE SG, to be published in January 2021, will focus on the practices and rituals of Jewish Passover by the local Jewish community and the Zoroastrian faith as practiced by the Parsi community in Singapore.

It will also cover dondang sayang (a poetic art form associated with the Malay and Straits Chinese communities in this region), traditional Chinese music, traditional Nanyang breakfast (comprising toast with kaya spread, half-boiled eggs and a cup of hot tea or coffee) and the craft of Indian goldsmithing.