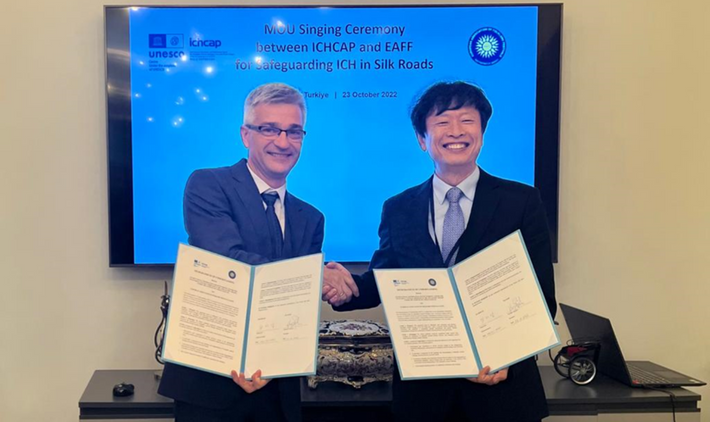 Mr. Jisung Kim, ICHCAP Director-General, and Mr. Kaloyan Nikolov, EAFF President discuss the key areas of cooperation based on the signed MOU and bounded by a handshake. © ICHCAP

On 23 October 2022, the International Information and Networking Centre for Intangible Cultural Heritage in the Asia-Pacific Region under the auspices of UNESCO (ICHCAP) signed a Memorandum of Understanding (MoU) with the European Association of Folklore Festivals (EAFF) to closely cooperate in safeguarding and promoting intangible cultural heritage in Silk Roads area based on a mutual understanding.

The signing ceremony was attended by Mr. Jisung Kim, Director-General of ICHCAP, and Mr. Kaloyan Nikolov, President of EAFF within the framework of the 2022 Silk Roads Living Heritage Network (SRLHN) Coordinating Bureau Meeting in Istanbul, Turkiye.

The agreement focuses on the development of the ICH festival networks and joint activities for the protection of living heritage in the context of the Convention on the Safeguarding of the Intangible Cultural Heritage of UNESCO. To note, SRLHN admitted to its membership around 40 ICH festivals from 9 countries along the Silk Roads. Therefore, this MOU represents a meaningful step forward in reviving and further expanding the ICH festival network.

Mr. Kim expressed that “this agreement is an opportunity to promote the magnificent intangible heritage along and beyond the Silk Roads area”, further expressing the intention to “implement various measures to create synergy between the two organisations based on each party’s expertise and experience”.

Mr. Nikolov noted that “cooperation and good relations between the organisers of the folklore festivals from Europe and Asia would set the stage for an open platform for further cultural exchanges”.


Through the signing of this MOU with the EAFF, ICHCAP plans to expand the Silk Roads ICH festival network, and channel these efforts to disseminating the value of rich living heritage along the Silk Roads through such measures as strengthening support for the participation of domestic ICH communities in Silk Roads ICH festivals, as well as inviting the practitioners from other countries to the local festivals in the Republic of Korea.