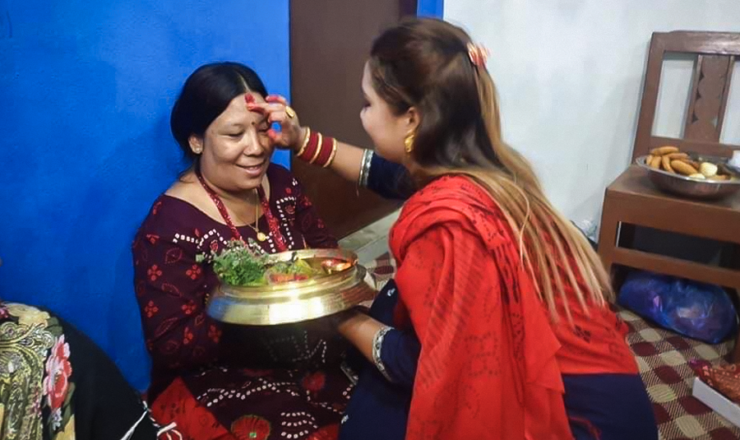 Daughter is putting 'Tika' on mother's forehead to get blessing on Mother's Day . © Rashmi Maharjan

Mother’s Day is a holiday in honor of the mothers, that is celebrated in different forms throughout the world. Nepalese Mother’s Day which is known as “Amako mukh herne din” which literally means to look upon a mother’s face in the Nepali language, is celebrated across the nation on the last day of the dark fortnight of April or early May.

On this auspicious day, regardless of age, all the sons and daughters prepare traditional sweets and gifts. Then they visit their mother and bow deeply to the mother’s toe to receive her blessing and offer her gifts and sweets. In consequence, the mother blesses them by touching their foreheads with her hand (bowing deep down to the toe is an ancient ritual that expresses honor and respect to the elders and love, good fortune, and blessings to the younger). On the other hand, married daughters dress in a colorful sari, wear different jewelry, and visit their mothers by carrying baskets full of delicious traditional foods, fruits, and sweets. All family members gather together, thank their mother, get a blessing from her, and spend quality time together.

However, those who have already lost their mother go to Mata Tirtha (Mata means mother and Tirtha means pilgrimage), a sacred pond southwest of central Kathmandu to do ritual offerings for the departed soul of the mother.

The story behind Mata Tirtha.

“Legends says that there was a boy who used to take his cows to graze nearby the pond. After the sudden death of his mother, he was depressed. On Mother’s Day, he went to the forest to pray at the edge of the pond in remembrance of his mother. As he offered gifts, his mother’s beloved face miraculously appeared in the water. He wanted her to go back home but it was impossible because she was dead. The dead mother agreed to appear in the pond every year, and the boy started visiting his mother on the same day every year.”

But, nevertheless, those whose mother is dead still go to the pond to take a holy bath, do sraddha (Hindu worship) and offer gifts nearby the temple to offer respect to the demised soul to rest in peace.

So, people across the country come to this pond, often traveling many hours they arrive at dawn, pray for the peace of their mother’s soul and take a bath in the pond which is considered a holy bath, and do sraddha. Every year on this day, a big religious fair takes place at Mata Tirtha. After the offerings and praying and holy bathing in the name of the deceased, people say that they feel the warmth of their mother’s blessing. So, after finishing all rituals they go to the fair and enjoy it.

But nowadays Mother’s Day celebration is being westernized. People instead of preparing traditional sweets, bake or buy a cake with “Happy Mother’s Day” on it and instead of eating at home, they eat out.

In spite of that, Mother’s Day is one of the most important traditions in Nepal. It is a special time for a family reunion and showing respect to the mother.