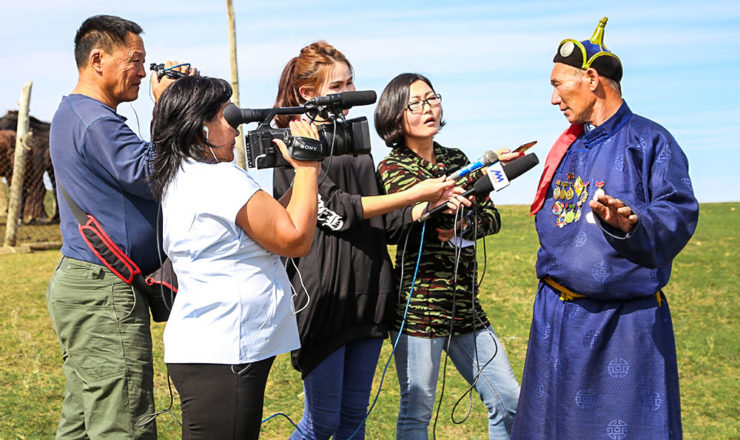 Trainees interview a ICH transmitter during the field surveys © CRIHAP

The Capacity Building Workshop: On the Role of Media for Implementation of the UNESCO 2003 Convention for the Safeguarding of the Intangible Cultural Heritage was held from 11 to 15 September 2017 in Darkhan-Uul Province, Mongolia. It was the first capacity building workshop conducted by the International Training Centre for Intangible Cultural Heritage in the Asia-Pacific Region under the auspices of UNESCO (CRIHAP) in Mongolia that targets media practitioners.

“Lack of attention by journalists engaged in safeguarding intangible cultural heritage has resulted in many precious tangible or intangible cultural heritages in Mongolia being neglected,” said Navaanjantsan Bold, director of the cultural and art policy department of the Ministry of Education, Culture, Science and Sports at the opening session. “The workshop can not only raise public awareness of safeguarding ICH, but also promote training cooperation in Northeast Asia.”

Badam-Ochir Galaarid, president of the Confederation of Mongolian Journalists, said, “The workshop has included media representatives from national and regional TV, papers and networks in 21 provinces.” He encouraged trainees to grasp the rare opportunity to learn more about the 2003 Convention, to make the workshop the best place for Mongolian journalists to practice cultural training.

Badam Altansukh, executive director of CCHCN, first expressed gratitude to CRIHAP for organizing the workshop. He expected that more professional training would be carried out in Mongolia through the joint effort of CRIHAP and ICH safeguarding organizations in Mongolia.

Director-General of the CRIHAP Liang Bin pointed out at the opening ceremony that media played an important role in cultural development. He hoped that trainees could fully leverage the role of media to promote public ICH safeguarding according to the spirits of the 2003 Convention.

Sukhbaatar Uyanga, secretary general of the Mongolian National Commission for UNESCO, thanked CRIHAP, a category two center specializing in capacity-building, for its role in putting on the workshop and exploring new training modes. She hoped trainees could share what they had learned with colleagues and CRIHAP could offer more training and support to Mongolia.

UNESCO-accredited facilitators Mr. Rahul Goswami and Ms. Alexandra Denes introduced basic concepts of the 2003 Convention, basic knowledge about ICH safeguarding and its relationship with sustainable development along with ethical principles and responsibilities. In addition, trainees were grouped to practice field survey and interview ICH practitioners. CRIHAP also invited Mr. Xue Shuai from China Culture Daily to share his experience and have discussions on reporting ICH safeguarding with Mongolia’s media representatives.

The workshop was held in response to a request by Mongolian media practitioners during the 2016 Sub-Regional Meeting for Intangible Cultural Heritage Safeguarding in Northeast Asia held on 10 and 11 October 2016 in Ulaanbaatar, Mongolia. Hosted by the Mongolian National Commission for UNESCO, its theme was The Role of the Media in Raising Awareness about Intangible Cultural Heritage. Jointly organized by ICHCAP and the UNESCO Beijing Office, the workshop was also the first attempt by CRIHAP to tailor a themed training to a specific field.

Forty-two trainees who had gone through a strict selection process represented all kinds of media practitioners in Mongolia. A minority trainee from remote West Mongolia traveled nearly 2,000 kilometers to attend the workshop. They were actively engaged in the curriculum and gave an excellent performance in their field work. Training content, the outcome of many discussions between organizers and facilitators, was well received by the trainees. Many trainees said that they understood the 2003 Convention better and realized their responsibilities in promoting ICH safeguarding through the training.

Trainees also proposed suggestions to the government and media industry after thorough discussions. Their ideas would be demonstrated in their future work to promote ICH safeguarding.

After the training, CRIHAP invited all the trainees to write reports and articles on ICH safeguarding, what they learned and their experiences, which would be collected together with their field survey exercises during the workshop to serve as references for further training by CRIHAP and in Mongolia.

Including this workshop, trainings organized by CRIHAP have covered more than 31 countries in the Asia-Pacific region, directly benefiting 872 people.