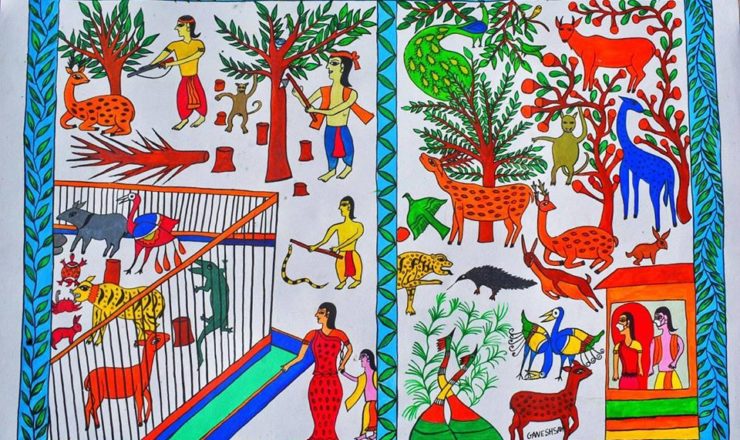 Vibrant colors, deception of animals, plants, and everyday life of people to the mythological narratives are the features of Mithila art. But the most important aspect of about this art is that women strictly have a monopoly over it. So this is the reason, we can see many everyday activities—washing, cooking, fetching water, combing hair, singing in choirs in groups—featured in this art. Mithila art also features Hindu gods and goddess; mythological events along with the animals, birds and plants.

The Mithila art got its name form namesake Kingdom Mithila also known as Videha Kingdom. The ancient kingdom of Videha extended form the region, which is now in North Bihar in India and eastern Terai of Nepal. In Nepal present day Janakpur city in is considered to be the seat of ancient Kingdom. The most famous king of this kingdom was Janak. He had daughter named Sita, who then got married to prince Ram of Ayodhaya, India. Ram and Sita are the pivotal character of Hindu mythology Ramayan. The marriage of Ram and Sita are also explicitly featured in Mithila art too. The people living in Mithila region are known as Mithil.

Mithila art had the humble origin. Mithili women used to decorate the walls of their mud houses with everyday characters and vibrant colors, mostly red, yellow, orange, blue, and black. The colors are made from the local clay, plants root, flowers, berries, etc. Due to its natural elements these paintings were temporary, stayed on walls for few months. Traditionally the paintings were done with raw cotton or lint wrapped in bamboo splint. Also women painted the walls regularly according to the seasonal festivals. According to the festivals the picture depicted also changes. Also due to the natural erosion, the decorations on walls need to be done regularly. So the young girls also get an opportunity to learn from their mothers, neighbors, and the elderly through decorating their houses, watching them and painting with them.

Mithila art also plays a pivotal role in weddings. Walls of brides’ homes are painted with various motifs, with each subject have special meaning, such as fish for fertility and good luck, parrot for love and many other with specific meanings. The rituals and festivals, which are being performed, the walls are painted accordingly which symbolizes the functions. Now Mithila art has exceeded walls of houses and courtyards boundaries of Mithila region. The art, which was a medium for the expression of women creativity, feelings and everyday life, is now an identity of Janakpur and whole Mithila region.

The introduction of Nepali handmade lokhta paper (made from the fibrous inner bark of the Daphne bholua shrub) in 1970s to Mithila art helped to transcend from walls to papers then to cups, mugs, t-shirts and now everywhere. Now it’s not just ordinary art but also has become livelihood of many women. Cups, mugs, plate, boxes, bags and many more; brightly painted in Mithila art could be bought for daily use.

Mithila art not only jumped the walls of the courtyards to everyday usable objects but had also brought changes in the objects that are drawn. In addition to the plants, animals and humans, the inclusion of the modern objects could also be seen in Mithila art as in the picture which depicts latest pandemic and deforestation. Although Mithila art is now known outside the Mithila region and even abroad, the traditional art in walls are decreasing. People’s choice of building cemented houses are losing its traditional wall paintings. Though for the tourism promotion purpose even the cemented walls in that region started see Mithila arts over the cemented walls.

NOTE: The author thanks Ajit Shrivastay for the valuable information provided.