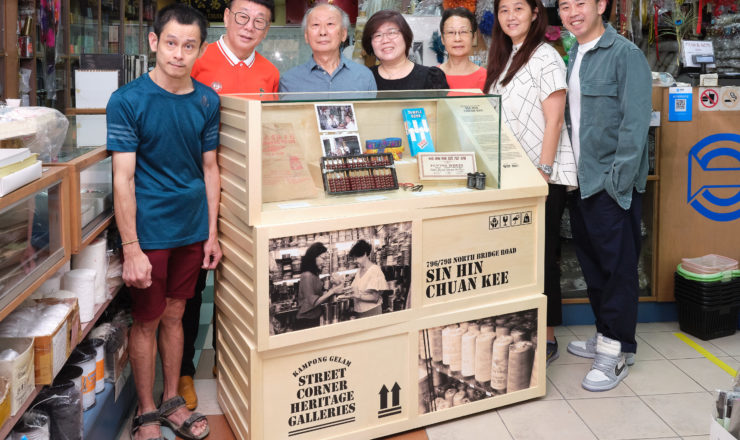 The second series of heritage galleries showcases the rich and diverse heritage of traditional trades and businesses in the historical Kampong Gelam precinct, their products as well as their respective intangible cultural heritage (ICH) elements through mini mobile galleries featuring a write-up and the display of historical documents, photographs, objects, etc.

There are a total of seven traditional trades and businesses featured in the second series of NHB’s Street Corner Heritage Galleries. They include four food and beverage outlets, one perfumery shop, one Islamic products and perfumery shop, and one haberdashery store.

The scheme is part of NHB’s five-year master plan, Our SG Heritage Plan, which seeks to display heritage in everyday places to encourage greater public awareness and appreciation of heritage. The second series of Street Corner Heritage Galleries follows the first series, which was launched in 2020 and featured five traditional trades and businesses within the Balestier precinct.

NHB will be extending the scheme to showcase more traditional trades and businesses in Little India in 2021 followed by Chinatown and Geylang Serai in 2022. Overall, NHB hopes to roll out the scheme to cover five different precincts and to co-create a total of thirty Street Corner Heritage Galleries across these precincts by the end of 2022.

Through the Street Corner Heritage Galleries scheme, NHB hopes to encourage traditional trades and businesses to document and showcase their heritage; develop a network of “mini-museums” across different precincts; and create surprising heritage encounters for visitors to each precinct as part of NHB’s placemaking efforts.

To find out more about the second series of Singapore’s Street Corner Heritage Galleries, please click on the following link: https://www.roots.gov.sg/stories-landing/stories/street-corner-heritage-galleries-kampong-gelam