Mat Weaving in the Maldives 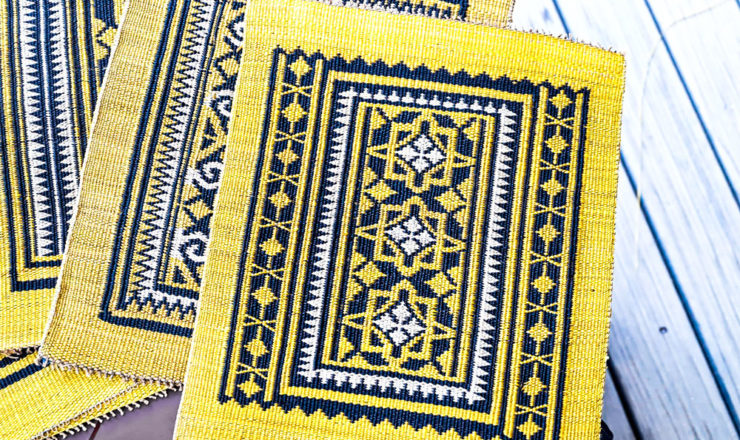 Thundukunaa or traditional mat is popularly presented as a royal gift in the ancient times. Traditionally produced by women, the practice of making Maldivian traditional mat is handed down from generation to generation—mostly from mother to daughter. The women of Gaafu Dhaalu Gahdhoo are perhaps the most skilled producers of this prominent symbol of Maldivian craftsmanship. The mats are hand-woven on a loom from reeds which are dried in the sun and stained with natural dyes of different colors. Thundukunaa is created with beautiful, elaborate, and ornate designs. Quite functional in nature, traditionally used for sleeping, seating or praying, thundukunaa is still presented as a memorabilia to visiting foreign dignitaries.

Gaafu Dhaalu Fiyoaree harbors the marshland where premium quality reed or hau grows which is used for making thundukunaa. The marshland is of significant importance to the island for its resilience in terms of controlling flooding from heavy downpours and sea surges. The raw material for the Maldivian traditional mat is a specific kind of reed found in Fiyoaree, which can last for hundreds of years. It is also the only island out of the 1,190 islands across the Maldives, where premium quality reeds preferred by the mat weaving community are found. The site is of national significance in both ecological and cultural aspects. Therefore, establishing a business model for reed is of crucial importance for conservation of the area.

Through successfully receiving the small grant scheme from the Global Environment Facility (GEF) and the Mangroves for the Future (MFF) facilitated through United Nations Development Program (UNDP), the Maldives Authentic Crafts Cooperative Society (MACCS) has not only been able to revive traditional livelihoods (reed cultivation and mat weaving), but has also empowered a number of women and enhanced their general well-being. MACCS is still continuing to revive the tradition by organizing a number of mat weaving workshops across the Maldives. The organization has also released a folk story on the Fiyoaree reeds, raising awareness of the source of thundukunaa. The last workshop held in Fuvahmulah to teach the tradition of mat weaving concluded on 10 October 2017.