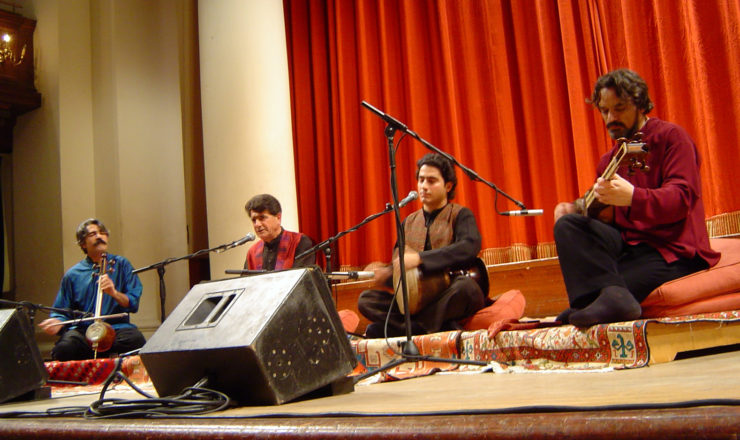 A voice that has revived traditional Persian music and played a role like Ferdowsi (a poet who preserved the Persian language for 900 years) in literature for the music world. A hero of the art world who interlaced the world of literature with sounds and melodies. Master Shajarian blew in the existence of the country with his voice and gave it life again.

Mohammad Reza Shajarian is the artist whose voice resonates beyond the memories of Persians of his generation and the younger generations after him. A voice that is the phonetic embodiment of Persian music culture; if anyone mentions traditional Persian music, the voice of Rabbana of Mohammad Reza Shajarian registered as ICH by the Ministry of Tourism will resonate in their minds.

Born on 23 September 1940, into a family of art, culture, and literature, Shajarian began singing at an early age. When he entered school in 1948, he started reciting the Qur’an with his father. He continued it very well so that by the age of 10, he could recite the Qur’an in political ceremonies and gatherings. His first high school whispers began with the help of his uncle and Mr. Young (a teacher). The voice of young Mohammad Reza Shajarian was broadcast in 1959 for the first time on Khorasan Radio.

Shajarian was so prominent that the largest world organizations and art centres would bequeath him with great titles. The website of the Asian Association has mentioned Shajarian as the most famous Persian of original music art. The National Public Radio has named him as one of the top fifty voices in the world, and the Vancouver Sun titled him as the most influential music artist in the world.

Shajarian was a great master of traditional Persian music who worked hard to spread the music of his land, introduce its culture and art beyond borders, and became a label of music of his country. He did a great service to patriotic music, such as the UNESCO Golden Picasso Medal, the BITA Award from Stanford University, the UNESCO Mozart Prize, the National Knight of the French Embassy, the High Prize for Art for Peace, and the Aga Khan Foundation Award as Lord of Music to Enrich Human Musical Heritage. He was perhaps the only artist to inject the essence of Persian music into the hearts of the world with his voice.

Shajarian founded Delawaz Records in 1977, and in 1978, he won first place in Quran recitation competitions all over the country. During the eighties, Shajarian began an extensive collaboration with Parviz Meshkatian, which resulted in the albums such as Mahour, Bidad, Nava, and Dastan. In the same years, he performed concerts outside Persia with the Aref group.

During his professional life, Shajarian held numerous performances around the world. Since 1979, he has been performing in the United States and Europe with the Pirniakan and Andalibi groups.

Shajarian married Miss Farkhondeh Golafshan in Quchan resulted in a thirty-year life, three daughters, and a son, Homayoun, who is also an artist as great as his father. They have published great performances and works together.

The beloved artist, who is not only in the hearts of the Persian people but also is in the hearts of the world people has released more than seventy albums during his professional life. The best of which are Yad Ayam(Memory of the Days), Del Majnoon (The Heart Insanity), Astan-e Janan, Bidad, Dastan, Nava, Bi To Besar Nemishavad (It cannot be without you), Faryad (Scream), Dar Khial (In imagination), and Shab Sokoot Kavir (Night, Silence, Desert).

Traditions are so important as the cultural lifeblood of a country. Some of them have been transmitted to us through audio recordings, which have naturally formulated laws for themselves that ultimately define the hearing culture, the essence of which is perpetuated by humans. A culture where part of it is playing music, and part of it is singing, and he was the perpetrator of such a culture.