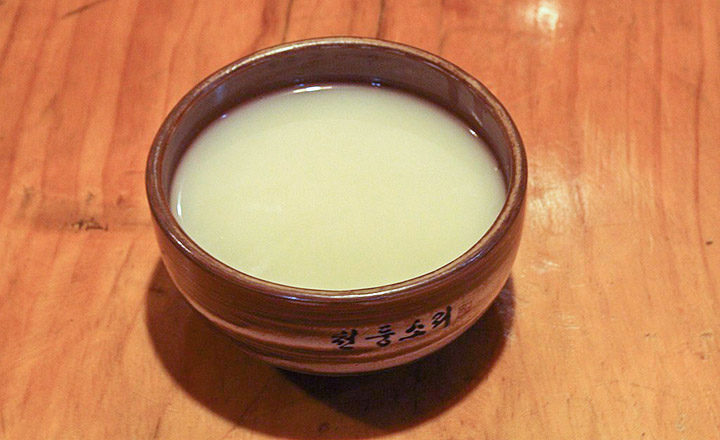 The Cultural Heritage Administration has a new listing on the national intangible heritage list: the traditional Korean alcoholic beverage makgeolli and its associated culture. It incorporates the skill of making this milky and lightly effervescent rice wine and the cultural practices associated with sharing it. Makgeolli is conventionally brewed by cooking rice, mixing it with water and nuruk (a fermentation starter that contains sacchrogenic enzymes and natural yeast), and running the mash through a sieve after a few days of fermentation. Mak in makgeolli means ‘right now’ or ‘just then’ and geolli mean ‘to filter.’ Not only is the word pure Korean, but the name itself reveals the method of making the beverage and its characteristics.

Makgeolli is an alcoholic beverage made from rice or other grains that is purported to date back to the introduction of farming on the Korean Peninsula. Histories on the Three Kingdoms period, such as Samguk Sagi (History of the Three Kingdoms) and Samguk Yusa (Memorabilia of the Three Kingdoms) include terms such as mion, jiju, and ryoye that presumably refer to what is known as makgeolli today. Baekju and other terms purported to denote makgeolli appear in Dongguk Isanggukjip (Collected Work by Minister Yi of the Eastern State) and other literary compilations from the Goryeo Dynasty. Books from the Joseon period, such as the novel Chunhyangjeon (The Story of Chunhyang) and the encyclopedia Gwangjaemulbo (Information on Comprehensive Things) contain mentions of mok-geolli or mak-geolli. Joseon-era cookbooks, such as Gyuhap Chongseo and Eumsik Dimibang, contain recipes for alcoholic beverages that would have been enjoyed as a cloudy makgeolli.

Makgeolli can be made easily and at low cost simply with rice and nuruk. As a result, it was easily affordable, and it became the alcohol to sooth the sorrows of ordinary people. Makgeolli quenched the thirst of farmers throughout the working season. Korean farm laborers used to say, “If it all pays the same, I’d rather offer a hand to the farmhouse serving the most delicious makgeolli.”

Makgeolli was also an indispensable element in ritual ceremonies and celebrations or mourning. Many traditions featuring makgeolli as a ritual drink have been transmitted to the present. The milky rice wine is still presented as an offering in many modern ceremonies commemorating, for example, the completion of a building, purchase of a new car, or opening of shops.

In a nutshell, the tradition of making and sharing makgeolli has been evaluated as a worth entry onto the national intangible heritage list for the following reasons: its transmission across the Korean Peninsula for ages; its historicity is supported by documents; it serves as an interesting subject of study in diverse academic fields such as history, food sciences, and folklore studies; and its association with a wide range of farmers’ songs, folkloric sayings, and literary work; among other reasons.

For more information about the inscription and the background of makgeolli, visit http://english.cha.go.kr/cop/bbs/selectBoardArticle.do?nttId=79559&bbsId=BBSMSTR_1200&pageIndex=1&pageUnit=10&searchCnd=&searchWrd=&ctgryLrcls=&ctgryMdcls=&ctgrySmcls=&ntcStartDt=&ntcEndDt=&searchUseYn=&mn=EN_01_01