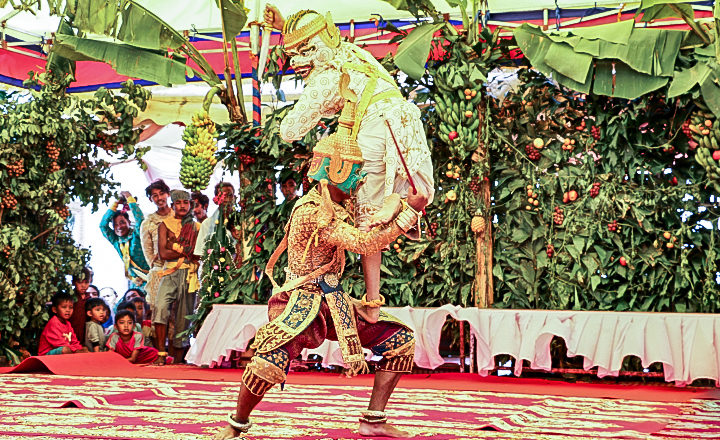 Inscribed in 2018 on the List of Intangible Cultural Heritage in Need of Urgent Safeguarding, Lkhon Khol Wat Svay Andet (Lkhon Kohl) is practiced in a community surrounding Wat Svay Andet, a Buddhist monastery located around ten kilometers east of Phnom Penh on the Mekong River. Lkhon Khol is a traditional mask theater performance of Cambodia with its origins during the Angkor period (ninth to fifteenth centuries). It exclusively is performed by men wearing masks to the accompaniment of a traditional orchestra and melodious recitation.

Lkhon Khol, also known as “the monkey dance,” is ceremoniously performed once a year after the Khmer New Year for ritual purposes, linked mostly to the cycle of rice farming and the needs of farming communities. A specific theatrical performance is the Reamker, the Khmer version of Ramayana, which includes an introduction by storytellers who play an important role in the performance.

Lkhon Khol is passed across generations orally. However, from 1970 to 1984, due to war and the Khmer Rouge regime, transmission was nearly impossible. In addition, economic factors, insufficient resources, and economic migration from the community have also limited transmission, which is what led it to be inscribed on the Urgent Safeguarding list.

Two theater groups, Kampong Thom and the National Theater troupes from the Department of Fine Arts and the Ministry of Culture and fine arts, have started performing the Lkhon Khol. In addition, the theatrical performance is also part of the syllabus at the University of Fine Arts.