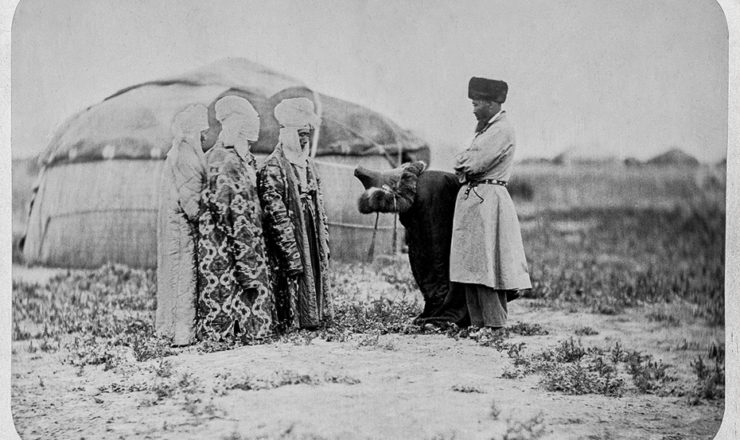 As in other societies, the family may be the smallest social unit but holds the highest priority in Kyrgyz culture, so the making of a family is very important in Kyrgyzstan. This is why in Kyrgyz society wedding ceremony is an important event. The Kyrgyz traditional wedding requires an understanding of soiko saluu, kyz uzatuu, kalym, sep beruu, and nikahh kyiuu among others.

After, there is the kyz uzatuu tradition, a custom to say goodbye to the bride by holding a feast and preparing sep (dowry). Accordingly, the bride is taken to groom’s house through a special rite and respect. However, the practice of ala kachuu (bride kidnaping without the bride’s consent) is not part of Kyrgyz traditions. Traditionally, bride kidnapping meant an arranged marriage when a loving couple agreed to marry but the bride’s parents were against the marriage. In today’s Kyrgyz traditions, however, the understanding of bride kidnapping is very much distorted. Therefore, the practice is illegal, which leads to criminal liabilities. A legal and socially acceptable Kyrgyz traditional wedding incorporates rituals in which the bride and groom marry with respect and honor.

Other wedding customs and rituals are performed in the groom’s house, where the official celebration takes place, such as welcoming the bride and displaying her dowry. The groom’s family present a white scarf to the bride as a symbol of blessing. The bride usually spends several days behind koshogo (curtain) while the visitors come and present different scarfs to see the new bride. Lastly, in the nike kiyuu tradition, a Muslim ceremony, the mullah reads a prayer and asks the couple of their consent to marry.

Nowadays, a mix of traditional and western styles of wedding is common in Kyrgyz society, incorporating decorated cars, visits in famous sites, and a feast in restaurants.