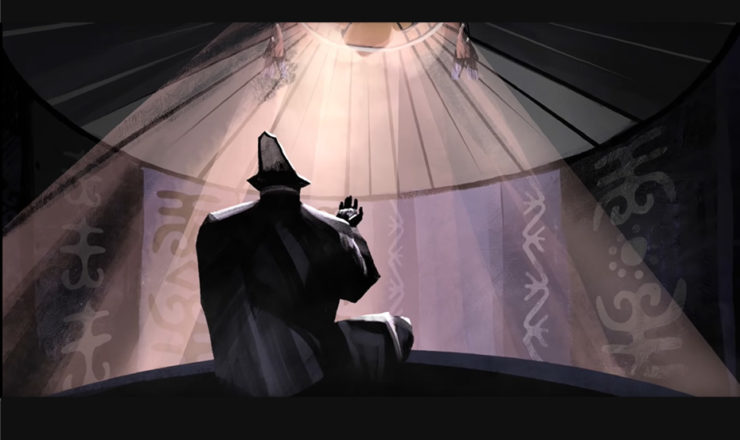 Manas is the largest Kyrgyz epic and the name of its main character—the hero, who united the Kyrgyz. Manas is included in the UNESCO list of masterpieces of the intangible cultural heritage of mankind, as well as in the Guinness Book of Records as the most voluminous epic in the world. The Manas epic is divided into three parts: “Manas,” “Semetey.” and “Seytek.” The main contents of the epic are the feats of Manas. The Sagymbai Orozbakov (1867–1930) and Sayakbay Karalaev (1894–1971) Manas versions are considered classics. Modern scholars have not come to a consensus about when  the epic originated. Hypotheses put forward indicate that it is connected with events of the Kyrgyz people of the ninth century. Some historians believe that the historical background corresponds to conditions of the fifteenth to eighteenth centuries but that it also contains more ancient ideas. Also, many historians point out that the epic time in Manas is not mythical, but historical.

Last year, there was a youth hackathon event to create multimedia contents on intangible cultural heritage. Uluu Ash, a motion comic based on Manas, was made at this event. A motion comic is one in which sound or music is added to illustrations, and some pages show moving pictures, which is different from an animation with moving pictures throughout.

Ak Shumkar KUT public association, a Kyrgyz NGO, implemented the motion comic project with the support of  the Institute for Sustainable Development Strategy, public foundation. During the hackathon, project participants developed a demo version of the mobile application named Manas, and a script was written for the motion comic. Later, the film working group, which included animators, artists, journalists, scriptwriters, musicians, and Manas reciters, continued to work and eventually made the film.

Uluu Ash, the film’s title, is one of the most important scenes in the epic. The glorious Kyrgyz Khan Kekötöy, having reached old age, leaves a testament to his son Bokmurun with instructions on how to make a burial and how to arrange all the posthumous rites. He also bequeaths to seek advice from Manas. Having buried Kökötöy, Bokmurun prepares a memorial service for his father. Manas takes over the entire administration. Many visitors from distant countries come to the ceremony. The Kyrgyz people gathered the representatives from Asia and Europe. The more important point in this ceremony was the advice of wise men and brave warriors at the end of the commemoration, which is described in the film.

During the hackathon, an informal platform was formed to generate ideas for promoting elements of intangible cultural heritage among young people. This platform has its further development as a club for young creative minds to enhance comprehension and promote traditional culture. One of the products of the event was a mobile application of Manas. The application is informative and educational. It has been growing with subsequent addition and expansion of its content. This epic product is being made for the first time, and hopefully will provide a good example for young people to show the possibility that spiritual and cultural heritage may even now be the most vital element determining future and development prospects.