Kyrgyz Folklore: Imagination, Orientation, and Explanation of the Past 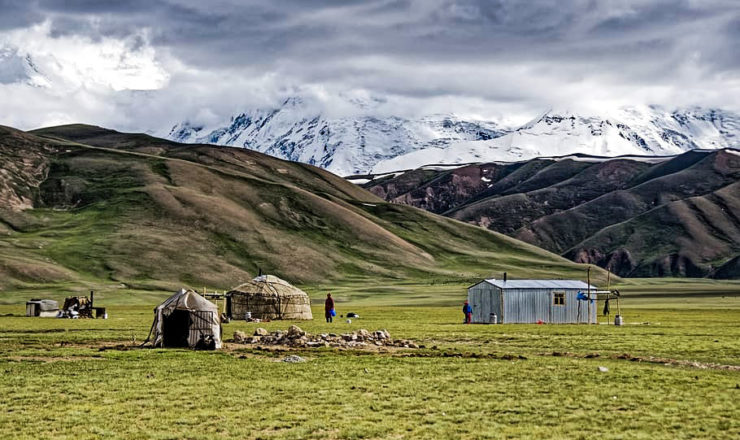 With stupefying landscapes to explore, marked by the remnants of ancient tribes and Silk Road travelers, Kyrgyzstan is the perfect place to let one’s person and imagination roam wild.

The stunning Eurasian mountain country of Kyrgyzstan is renowned for its splendid natural panoramas and vast landscapes that, although isolated, belong to a unique cultural context. Human traces—Paleolithic petroglyphs, Saka burial mounds, Silk Road caravanserai, and Soviet-era monuments, to name a few—punctuate the mountains and valleys once roamed by the vagabonds and villagers of past centuries.

To the present day, the complex natural and historical Kyrgyz terrain elicits curiosity and wonder among those who attempt to navigate it. Furthermore, the interpretations by later ancestors of ancient remnants are interesting keystones in the development of culture. Over the decades and centuries, the distant, obscured past tends to remain a source of imagination, superstition, and inevitably, storytelling. While this reception of the past is not unique to the Kyrgyz culture, its history is characterized by many waves of migration, and thus the people who have traversed its mountains and valleys were at times vastly different to their predecessors.

It may be possible that as a result of their roaming, the ancient settlers of Kyrgyzstan felt a need to establish a sense of place within the overwhelming land they occupied, a desire to understand it and know what it had witnessed before they arrived. This attempt to fabricate a connection to the land and earlier peoples might account for the legends of Kyrgyz folklore that seek to explain the etiology of various monuments and natural phenomena, their reasons for being.

Cholpon-Ata, now a popular resort destination on the north shores of Lake Issyk-Kul, takes its compound name from the maiden of the origin myth of the lake. Legend has it that long ago lived Cholpon, a beautiful blue-eyed Kyrgyz girl who lived with her tribe near the mountains. The amoured Ulan and Santash fought and injured one another for her affections, their rivalry expanding to two groups of allied kin. In the face of a choice which would result in the detriment of one of the dijigits (horseback warriors), Cholpon tore her own heart from her chest, rendering it unattainable to either, and died on the sunrise-facing hill that commemorates her. The mourning Kyrgyz, who remained divided from the feud, filled the valley between the mountains with their tears and created Lake Issyk-Kul, which separated the bitter tribes. The two groups thus name the northern and southern banks, Kungey and Terskey while the Ulan and Santash dijigits blow as the east and west winds, occasionally grappling with one another in the form of a storm above the lake.

The photogenic ridge of seven red sandstone peaks known as Jeti-Ögüz are also the setting of Kyrgyz myths. The formation’s name, meaning Seven Bulls, may reference a folktale in which the eponymous animals were petrified by the gods to protect human inhabitants of the region from their wild rampage. In another legend, a Kyrgyz khan seeks to avenge the theft of his wife by another man and is advised by an elder to do so by killing the wife as punishment. His plan is hatched at a funeral feast, when, after the sacrificing of seven bulls, he similarly stabs and kills his stolen wife. Her bleeding heart flooded the valley, the blood carrying the slaughtered bulls with it to the current position of the red rocks.

Tengrism and the Tien Shan

Some of the vast mountains which Kyrgyzstan is known for belong to the Tien Shan range, also shared with China and Kazakhstan. These majestic snow-capped peaks cast upon those who face them the impression of a force that was mighty, powerful, and divine. Such mountains are held sacred in the Central Eurasian religion of Tengrism, rooted in the ancient Mongol and Turkic tradition that worshipped the god Tengri personified by the sky, whose name attests to the religious and legendary significance of the mountains. The Kyrgyz ‘Tengri’ and Chinese tian are linguistically linked, both meaning sky as well as god; the Tian Shan can thus be translated to mean ‘Sky Mountain’ in honor of the god.

Recounting these ancient legends are only a small sample group of the rich folkloric tradition woven into Kyrgyzstan’s vast landscape and varied population. We can only assume there to be infinite variations to the stories that are continually told, and far more strands of the oral tradition that may survive either sparsely or not at all. But there is a timelessness about these tales of the origin of natural phenomena that continue to punctuate Kyrgyz land and something in their phrasing and rhythm that longs to be shared aloud, repeated, and remembered.