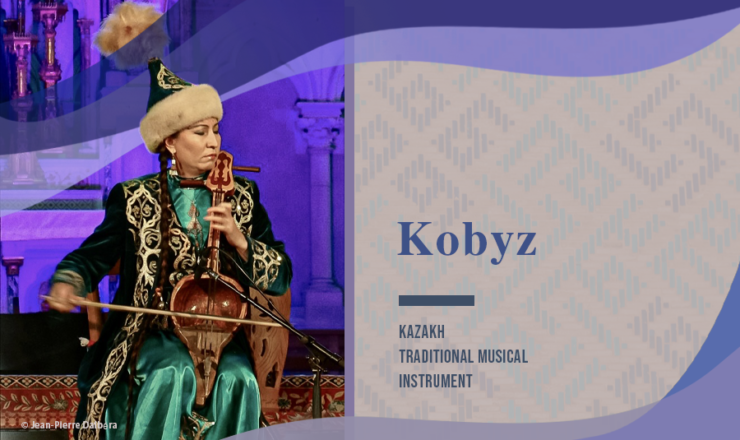 Kobyz (kyl-kobyz) is a sacred instrument embodying the spiritual world of a nomad. It is perhaps the most magical traditional musical instrument of Kazakh people. From being a sacred solo-instrument that sounded at the hands of nomads to moving to orchestras in large concert halls, kobyz went through a long journey onto the big stage.

Kobyz is made of a whole piece of wood, which is one of the most ancient ways of making musical instruments. It is an ancient belief that the living soul of a tree that is projected into the instrument is preserved only in the whole piece of wood. Kobyz is not a factory instrument, so it is always made by craftsmen. Making a high-quality kobyz is an extremely laborious process that requires considerable knowledge and skills. Many musicians admit that Kobyz is very selective and does not match with everyone. According to the local ethno-designers, kobyz might stop producing a proper sound if a person with negative energy is around it.

Many valuable and interesting thoughts are contained in the ancient sounds and memories that come to life through the traditional musical instruments. As such, it contains morals about mutual respect, loyalty, justice, love for the motherland, and caring attitude towards elders. Therefore, it is necessary to carefully study and use those knowledge, traditions and customs in our lives today. Korkyt-ata himself, who is creator of kobyz and a legendary historical figure in Turkic world, became a symbol of national revival, the personification of high ideals of spirituality, morality, and love for the motherland.

It is believed that kobyz has a beneficial and healing effect to its surroundings. Traditionally, kobyz melodies were believed to have an ability to banish evil spirits, sicknesses and death. Sometimes the sound of a kobyz resembles a person’s speech coming from the depths of the soul. It is capable of transmitting the sounds of the wind, the voices of birds and animals, as well as the modern acoustics of the cities. However, the main point is a person’s feelings and soul hidden behind the melody. Having heard a kobyz play once, it is hard to forget its sound.

Safeguarding and Popularization of Kobyz in Modern Musical Culture

Ancient ‘kyl-kobyz’ underwent several improvements, and the ‘kobyz-prima’ was born in the bowels of the orchestra. Like many folk instruments, kobyz defended its right to be placed among the popular classic instruments in an orchestra and has demonstrated its ability to adapt to any musical situation. the 20th century became a turning point for many ethnic groups with a predominant vector towards the tendency to rethink folklore within the framework of new aesthetic views. There was a transition from old traditions of solo performance to polyphonic orchestral sounding, which allowed the entrance into the big stage and entailed the improvements of Kazakh folk musical instruments.

Revitalization of kobyz in the 20th century was contradictory: the pursuit of original traditions in national music was accompanied by the intensification of research in the field of folklore ethnography. However, people do not think of adaptation of traditional kobyz to contemporary time as a negative influence, rather they look at it with gratitude that this is how kobyz did not completely extinct as many other instruments. In fact, contemporary kobyz was constantly brought closer to the violin, which made it possible to present the instrument to the whole world, gain international recognition and move on to a new era – the era of reviving the “original ” traditional kyl-kobyz in the 21st century.