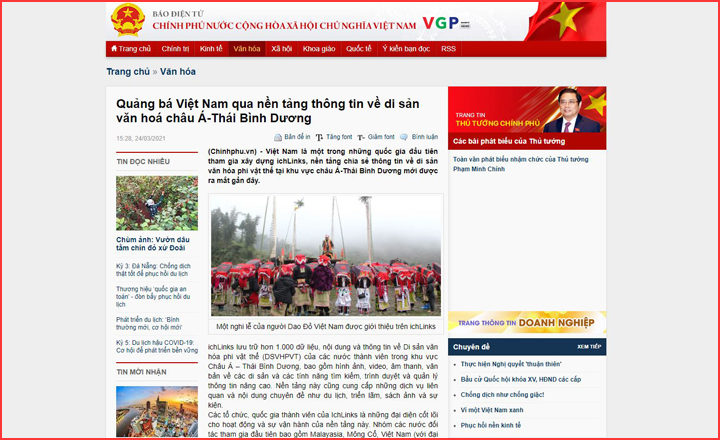 The Asia-Pacific ICH information sharing platform “ichLinks” (www.ichlinks.com), which started its service on March 15, was widely introduced through Kazakhstan and Vietnamese media. Both are the countries that are part of the partner country of this platform, and they expected to be able to promote their traditional culture globally through ichLinks, where anyone can browse international and colorful information on ICH.

Last month, Kazakhstan news agency Kazinform, a major daily newspapers Astana Times, and Baq.kz introduced Kazakhstan, citing a press release from the Ministry of Foreign Affairs that Kazakhstan has been participating as a partner country of ichLinks since last November. Kazakhstan’s cooperative organization for ichLinks is the National Committee for the Safeguarding of ICH, which is in charge of researching and safeguarding the country’s traditional knowledge, art, music, and play. Kazakhstan has registered 11 elements on UNESCO’s ICH list, including the traditional spring festival ceremony of horse breeders and the performance of Dombra Kui. There are more than 50 ICH elements managed by the state.

In an article in the Astana Times, Rustam Mujaparov, Vice Chairman of the National Committee for the Safeguarding of ICH, said, “The biggest advantage of the newly created digital platform is that anyone can explore the diverse cultural elements of Asia Pacific on this platform. It will be helpful to show off Kazakhstan’s unique traditional culture to the world’s citizens.”

Several media outlets in Vietnam, such as the government online news VGP and the state-run news agency VNA, also reported that their country’s National Institute of Culture and Arts Studies is participating in this platform as a partner organization. Mr. Bui Hoai Son, director of the institute, said in one of the media, that he “expects that Participating in this project will continue to promote Vietnamese heritage and at the same time help to develop in connection with the cultural and creative industries.”

In particular, the local media in Vietnam emphasized that the platform allows for close sharing and cooperation of ICH-related information with partner countries in the Asia-Pacific region as an advantage of the platform.

Meanwhile, the media of both countries announced that the platform project to build a network among countries in the Asia Pacific region is underway with financial and operational support from the government of the Republic of Korea and ICHCAP.