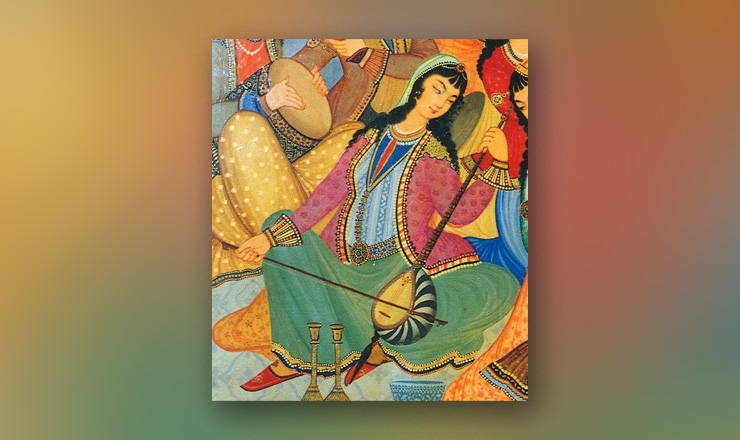 Kamancheh could be considered one of the national and novel instruments of Persia with a long history in the Orient. Through the historical pages of Baluchistan, an instrument named ghaychak is found and is similar to ghazhak or ghazh, a Perso-Islamic instrument.

Historical evidence, such as the great music book of Farabi, the poetry book of Masoud Saad, and the paintings of the Chehel Sotoon hall show the antiquity of using this instrument and its similarity to rabab, and give us this information that at the time of Safavid dynasty, it was common to play Kamancheh in the royal court.

Kamancheh is filled with a history full of ups and downs from the far East to the West and played in different lands in such a way that it is known as an ancestor of the violin, able to perform all the techniques of that instrument; however, its Persian origin is clearly recorded and mentioned in Egyptian documents from the fifteenth century.

The paintings in the Chehel Sotoon hall shows that this instrument, initially, included three strings, quoted from Edward Brown the British orientalist at nineteenth century, and at the time of Western influence on our culture, during the Qajar period, the fourth string was added to imitate one of its grandchildren: the violin.

In the region of Lorestan the instrument includes a rich history in such a way that you can find a Kamancheh in every music lover’s house. In this region, the players are called kamancheh-kesh, whereas in other regions, they are called as kamancheh-zan.

Musical instruments, the way they are played, and the essence of the sound created from them have penetrated in the human soul and has somehow transpired into oral literature. What we are speaking of are the poems written by great Persian poets in which we see the use of literature that has been common among musicians and musicians as a common language of the past. Poems written by poets such as Masoud Saad Salman, an eleventh century poet, who mentioned the name Kamancheh along with the names of other musical instruments in his poems as follows:

Farrukhi Sistani is another eleventh century poet who had mentioned Kamancheh in his poems:

Every day there was glory and welfare

Every day there was canon and tar played

The bowl is almost spherical and hollow. The upper surface is open, on which the skin is peeled, and the vault is installed. The outer surface of the bowl is decorated with pieces of oyster or bone. Some of the local fiddles are also open behind their bowls, which makes a louder sound. The skin of the aperture is made from the thin hull of quadrupeds such as deer, goats, and lambs.

The handle of the instrument is like a tube full of wood, which is about 25 cm long and 3 cm in diameter.

The fiddle vault is made of wood or bone, which is 4 cm long and 2 cm high. The vault rests on the skin of the bowl with its two small pedestals.

The claw is located at the beginning of the handle and is made of wood. Its surface is hollow. Four phones are placed in pairs on their sides. At the top of the head is a straight, crown, or narrow.

The Kamancheh includes four ears with several instrument strings and in the form of a wide-headed nail made of wood, which are located on the sides of the toe. The flat part of the phone rotates left and right in the player’s hand to tune. The narrow part is inside the space of the claw head, and one end of the wire is wrapped around it.

It is the thin, not long bone or stick the same size as the width of the handle between the claw and the handle, which the wires pass through its shallow grooves and attach to the ears.

This stand is a thin, moving metal bar ten centimeters long, that when played, one end is fastened to the bottom of the bowl with a screw, and the other is placed on the foot or the ground.