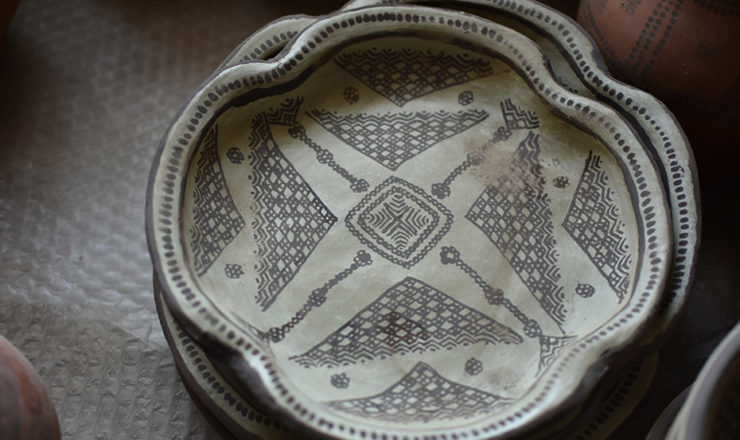 The vast land of Sistan and Baluchistan, the place with such a rich history associated with legends and narrations of great poets, is known as one of the few main genesis centers of pottery around the world.

Kalpuregan is an ancient village South of Sistan and Baluchistan Province with the most enchanting deserts, including the incredible vegetation and magnificent climate, which caused the unique lifestyle of the inhabitants that has penetrated through the veins of the culture recognized on the needlework and pottery of Kalpuregan design.

History, as a diary of events, has recorded the origins of pottery and needlework in this region. Pottery in Kalpuregan dates to 3000 BCE, and the precise art of needlework of this region is estimated to be from 5000 BCE. In the past, only men did pottery, and women did needlework art. Today, both arts are performed by the hands of Kalpuregan women.

Similar Design and the Identity Behind

The art comes from the heart, and penetrates through the fingers onto the body of subjects, the warp and weft of carpets, and within the yarns of the fabric, to create forms to tell the history and the interaction between the people and their environment, to depict definitions, and identities, as the bones of the culture.

Living in the severe desert conditions has turned concepts such as alliance, integrity, and protection into the values of Kalpuregan society. The basic forms used in Kalpuregan needlework and pottery are simple geometric forms carrying a deep meaning and value, turning these spectacular arts in this ancient village so special.

Circle: Represents unity and integrity and shows the connection between people and their living environment.

Zigzag: Represents how Baluchs stand against natural harshness, which you may not face in other ethnic groups.

Triangle: Giving an offensive sense that in Baluch folk beliefs, it separates enemies and evil spirits because, in ancient beliefs, spirits are intertwined with the existence of Baluch.

From the combination of the basic geometric shapes in the design of pottery, simple designs express the values among the traditional people of Kalpuregan. The values are derived from demanding lifestyles, unique living environments, failures, or wishes. Behind these forms, there are deep semantic concepts that express the depth of Kalpuregan artists’ perception of the environment and the nature of human existence and people’s tendency to self-fulfillment to reach a high level of aesthetics.

The closer he got to perfection, the more he resorted to his surrounding environment to solve his issues and became more in touch with the atmosphere. Following that, he sought to express his concepts and beliefs in nature. As a result, the combination of designs became more complex. And after combining a few simple shapes, he created more complicated forms to create abstract images of nature on artifacts to evoke the sense of being in nature.

Since art is the reflex of human emotions and senses he receives from his living environment, it expresses the way it affects people’s thoughts.

Even though they picture the environment, the way the lines and shapes are assembled are born of the artist’s mind. Among the forms created, shapes of flowers are the most used on the fabric.

Also, figures with sharp angles and triangle-based ones are common among other shapes originating from the nature and history of Sistan and Baluchistan. Especially through the people’s point of view that reminiscent of war scenes. Each line and form are the wage of the cultivation in the artist’s thought to have an abstract expression in the form of the visual structure.

How Similar but Different

A comparison of needlework with Kalpuregan pottery shows the close relationship between these motifs. In addition to their structural similarities, in many cases, they also have common semantic domains. These characteristics are influenced by the nature, culture, beliefs, and rare wishes of Kalpuregan people. Women in both fields are the essential creators of these historical arts. Despite being inspired by nature over the centuries, these mothers, who are a symbol of birth and growth, have not limited themselves to imitating the environment and creating new designs. They are very creative. However, the role of animals is less used in both areas.

Simple geometric forms are most present in various combinations due to the changes that occur through the minds of these artists. Visual qualities such as rhythm, repetition, symmetry, balance, and centralism have put both the Kalpuregan pottery and needlework art in order. In the end, the existence of many commonalities in both areas leads to the strengthening of cultural values. And will become the identity of the Baluch people in the Kalpuregan.