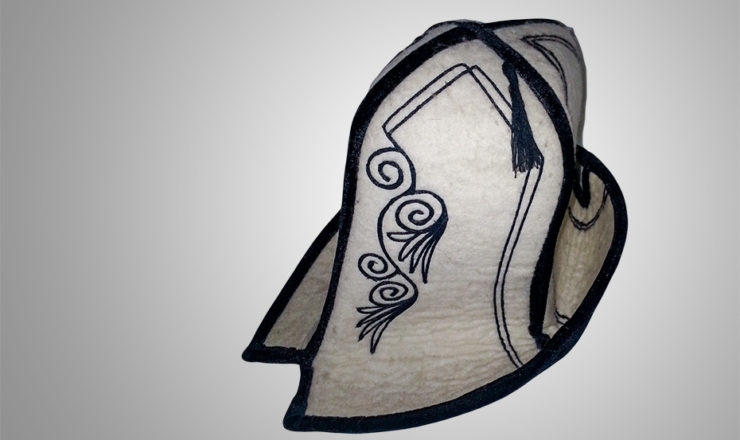 Kalpak is the traditional headdress of Kyrgyz men. Symmetrically cut, it is purely made up of white felt, with black or red edges. Craftswomen describe the parts of the kalpak’s structure as fire, water, air, and soil, connecting to one another as north and south and east and west.

The top of kalpak is called the sun ray, a symbol of life. Tassels are added to the top to symbolize the roots of progeny. Lines and patterns, stitched on white felt, have their own semantic content. The kalpak’s color depends on the person’s age or status. Children often wear kalpak with green edges, the color of grass and leaves. Middle-aged men wear brown kalpaks, a reference to the color of soil and mountains. Young men of marriageable age wear red kalpaks. Very wise people or those known for their leadership and justness wear a white kalpak with white edges.

Holders of traditional knowledge say that kalpak a headwear is not only to protect oneself from sun or rain but also to aid men in drawing energy from the universe. As an important part of the Kyrgyz people’s tradition, one can’t give another person his own kalpak, play with it, throw it up, or put it to the ground. It is treated with utmost respect and is usually presented as a gift to esteemed people and relatives.

To popularize the national headdress, 5 March is designated as the National Day of Kalpak in Kyrgyzstan. Conventionally on this day, schools have lessons on the kalpak, museums and theaters hold presentations on the historical origins of kalpak, and various flash mobs are organized with the participation of activists of youth movements and students to demonstrate the importance of kalpak in Kyrgyz culture. Consequently, kalpak is very popular among men of different ages, backgrounds, and social belonging. The cultural relevance of kalpak is reinforced by a huge number craftswomen producing it, making it available in all part of Kyrgyzstan.