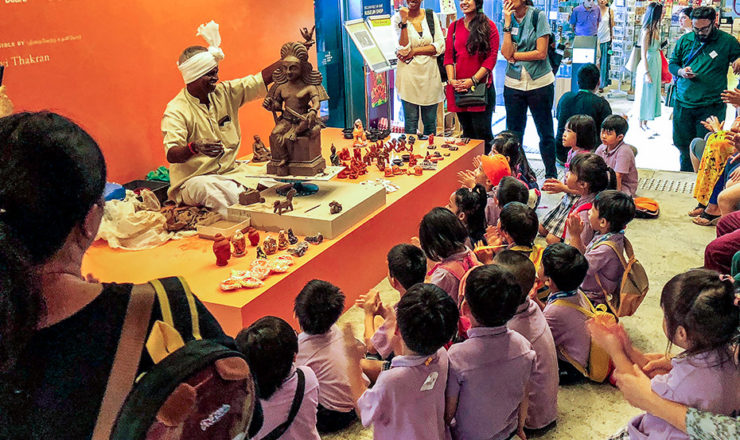 VK Munusamy, a terracotta master craftsperson, demonstrating his craft to an appreciative audience of students, tourists, and locals to the center ⓒ Courtesy of Indian Heritage Centre

Singapore is home to the Indian Heritage Centre, a heritage institution managed by the National Heritage Board and located in the heart of the Little India historical precinct. It is the only museum in the world that traces the history and heritage of diasporic Indian and South Asian communities in the Southeast Asian region and serves as a cultural focal point for the Indian community in Singapore.

Indians in Singapore, defined as persons of South Asian roots, are an integral part of Singapore’s multicultural society and comprised 9.1 percent of the total resident population in 2015.

When Indian migrants arrived in Singapore in the nineteenth and early twentieth centuries, many brought their traditional crafts, which form an important aspect of the community’s intangible cultural heritage (ICH). In December 2017, the Indian Heritage Centre collaborated with the National Museum, New Delhi and launched a special exhibition, Symbols and Scripts—The Language of Craft.

As part of its programming, the center curated a crafts demonstration platform featuring fourteen traditional craftspeople who showcased traditional Indian crafts that came from the hometowns of Singapore’s Indian communities. This is because traditional craft objects serve as a reflection of the society that produced them as well as “containers” of artistic and crafting traditions displaying the influence of historical, geographical, and socio-cultural factors.

Inspired by the success of the crafts demonstration platform, the Indian Heritage Centre and the High Commission of India in Singapore launched a new initiative, Kala Sangam (A Melange of Arts and Crafts) in June 2018. This country-to-country collaboration seeks to bring twelve traditional craftspeople from India to the center every year, over a five-year period, to demonstrate their crafts and interact with the local community. This initiative was made possible by a generous donation from Mr. Ravi Thakran and serves as a testament to the strong cultural relations between the countries.

The main objective of Kala Sangam is to showcase unique craft traditions from the hometowns of Singapore’s Indian communities as a means of safeguarding and promoting these crafts. Through such showcases, the Indian Heritage Centre hopes to raise greater public awareness and give visibility to craft traditions practiced by the Indian communities in Singapore and India.

Since its launch in October 2018, the Indian Heritage Centre has organized demonstrations and workshops by a terracotta craftsperson from Pondicherry, a Kashmiri papier mache craftsperson, a sikki grass basket weaver, a Tanjore painter, and a Parsi embroiderer. The center will also be bringing in a kalamkari textile painter from Andhra Pradesh, a pata chitra or scroll painter from Bengal and Orissa as well as a phulkari textile embroiderer from Punjab, among others.

At each craft demonstration and workshop, information is shared about the origins, the practices, and the products associated with each specific craft. These demonstrations and workshops also serve to encourage cultural dialogue between peoples of Singapore and India. More importantly, through workshops conducted by these craftspeople, the Indian Heritage Centre also provides a platform for the transmission of their skills.

In addition to Kala Sangam, the Indian Heritage Centre makes a conscious effort to showcase and promote different ICH elements and practitioners throughout the year, especially during its annual culture festival and the center’s open houses organized for major Indian festivals. These initiatives contribute to the center’s commitment to safeguard, promote, and facilitate the transmission of the diverse ICH elements practiced by the Indian community in Singapore.