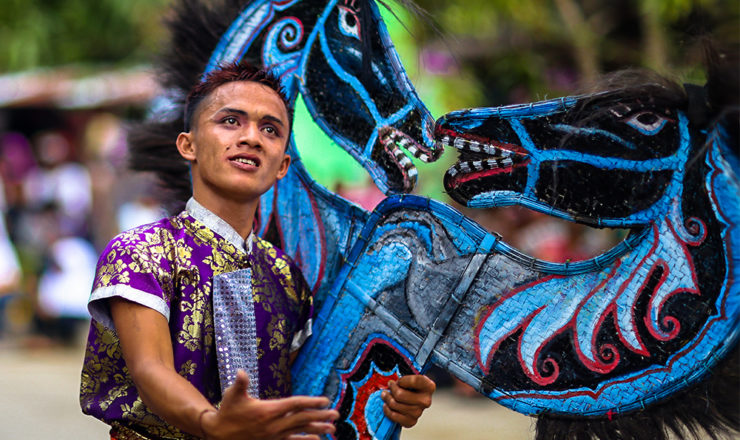 Jathilan (Javanese horse dance) combines dance, music, and altered states of consciousness in a spectacular cultural performance. Despite not being known to the outside world (even tourists visiting Java are hardly aware of its existence), it is popular among the locals.

A folk performance encompassing both ritual and entertainment purposes, jathilan is commonly described as ‘horse dance’ because the woven bamboo horse effigies are the hallmark props used by the performers. The dancers are believed to be possessed by spirits that make the dancers act differently and allow them to perform various feats based on physical invulnerability. Thus, performances might include demonstrations of eating glass, husking big green coconuts with bare teeth and hands, whipping performers, walking on hot coals, or being ran over by a motorcycle—all without inflicting any harm.

Other than the dancers, who are in the spotlight of the audience’s attention and dressed in bright costumes reminiscent of ancient Javanese warriors, the pawang is another key figure. The pawang conducts the performance and holds all the knowledge of the spirits’ nature and desires and the ways of inviting them and making them leave. All the dancers emphasize their trust in the pawang as the trance master, making sure that every performance will run safely and smoothly. None of the performers remember what has happened to them in trance. It is generally believed that anyone can learn to perform jathilan; not a particular talent but good personal relationship is the key reason for someone to be absorbed by a performing group. Jathilan groups are like big families where everyone helps and supports each other. Although the performers are paid for their shows, it is never expected to become their main source of income. Typically, performers have a day job. What drives them to keep performing jathilan is their desire to see their culture living—as they always say.

Horse trance dance is popular all over the island of Java. It can also be found in almost any area where Javanese immigrants are present—in other Indonesian islands, in neighboring countries such as Singapore and Malaysia (under the name kuda kepang), and even in South American Suriname, which has a 13 percent Javanese population. Jathilan is one of the many manifestations of Javanese folk religion that still remains quite widespread nowadays despite the official statistic indicating that over 90 percent of Javanese adhere to Islam.