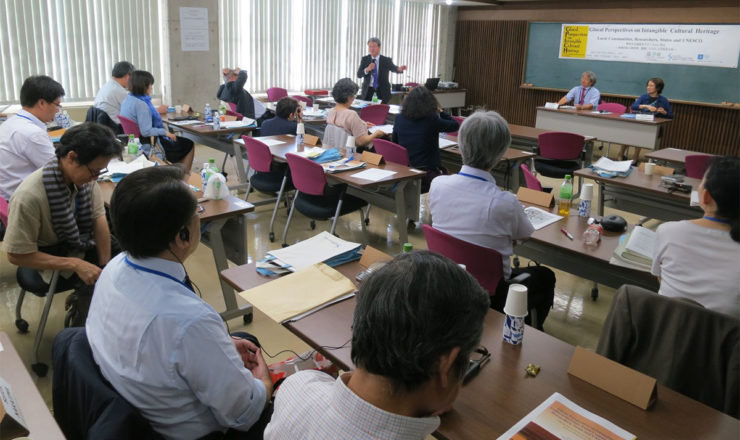 A scene from the symposium © IRCI

The International Research Centre for Intangible Cultural Heritage in the Asia-Pacific Region (IRCI), Glocal Study Center of Seijo University, and Japan’s Agency for Cultural Affairs jointly co-hosted an international symposium dubbed as “Glocal Perspectives on Intangible Cultural Heritage: Local Communities, Researchers, States and UNESCO” from 7 to 8 July 2017 in Tokyo. The symposium was planned within the framework of IRCI’s project ‘Mapping Studies on the Safeguarding of ICH’ which started in 2013.

The symposium aimed to overview and analyze safeguarding efforts on intangible cultural heritage. It also attempted to examine perspectives—from local to global—on how local communities, researchers, states, and UNESCO have been interacting in the process of safeguarding such heritage in the Asia-Pacific region. The symposium started with two keynote speeches by the former UNESCO Director-General Koïchiro Matsuura and the former UNESCO Assistant Director-General for Culture Lourdes Arizpe who is currently a professor at the National Autonomous University of Mexico.

The main part of the symposium was comprised of five sessions; each of which was assigned the specific theme concerning the aims of this symposium and chaired by eminent field experts: Mr Tomiyuki Uesugi, Director/Professor, Center for Glocal Studies, Seijo University, Japan; Mr Michael Foster, Professor, Department of East Asian Languages and Cultures, University of California, Davis, USA; Ms Noriko Aikawa-Faure, Former Director/Chief, Intangible Heritage Section, UNESCO; Mr Tim Curtis, Chief, Intangible Heritage Section, UNESCO; and Mr Wataru Iwamoto, Director-General, IRCI, Japan. A total of twenty-two experts and community members from six countries in the Asia-Pacific Region and two from US were actively involved in the discussions. The outputs of this symposium will be published to share the discussions and achievements with those who are interested in ICH safeguarding.