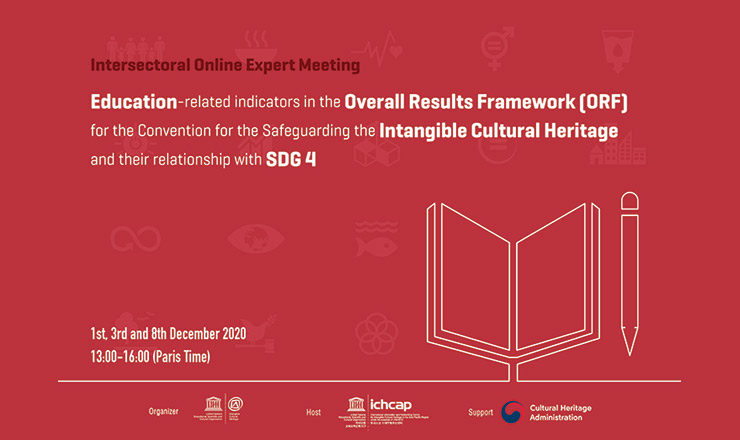 Together with the UNESCO headquarters in Paris, ICHCAP held the ` Online Expert Meeting Held for Education-related Indicators in the Overall Results Framework for the 2003 Convention for the Safeguarding of the Intangible Cultural Heritage and their Relation to the Indicators of Sustainable Development Goal 4′ for a total of 3 days on December 1st, 3rd and 8th, online. International experts on intangible heritage and education gathered from all over the world, experts in the field of culture and education at UNESCO headquarters, and more than 60 people in charge of each regional office participated.

The meeting discussed the links between the establishment and implementation of Overall Results Framework newly introduced in the 2003 Convention and the indicators related to education, and the implementation of the UN’s Sustainable Development Goals. In the future, the state parties to the 2003 Convention must regularly submit reports under the system, and from this year, it will be applied to countries in Latin America. The reports submission period for Korea and the Asia-Pacific region is in 2024. The meeting was presided by Ms. Susanne Schnüttgen, Chief of Capacity Building and Heritage Policy Unit, Intangible Cultural Heritage Section, UNESCO Paris, and chaired by Professor Janet Blake of Shahid Behesti University.

On the first day of the meeting, which began with the welcome speech by Dr. Tim Curtis (Chief of the Living Heritage Entity and Secretary of the Convention for the Safeguarding of the Intangible Cultural Heritage), Ms. Vibeke Jensen (Director, Division for Peace and Development of the Education Sector), Mr. Gi Hyung Keum (Director-General of ICHCAP), and Mr. Hyungbin Park (Senior Researcher from World Heritage Division, Cultural Heritage Administration of the Republic of Korea), an information session on writing the new periodic reports based on the Overall Results Framework was held. Subsequently, South American countries including Colombia, Mexico, Belize, and Jamaica shared their experiences in writing periodic reports. The Education Division at UNESCO HQ also shared their experiences in writing the Sustainable Development Goal 4.7 implementation report.

On the 3rd and 8th, in-depth discussions were held on the educational indicators within the Overall Results Framework. The experts were divided into 4 small groups and had a time to interpret each indicator and discuss case development. Furthermore, discussions continued on how these indicators could ultimately be integrated with the educational goals for implementing the Sustainable Development Goals such as global citizenship education.

Experts gathered from all over the world regretted the lack of time as they had heated discussions while connecting online from different time zones. The discussions lasted until early in the morning or until late at night. The contents of this meeting will be released online at the end of January next year after being summarized easily and concisely through the preparation period by the UNESCO HQ and ICHCAP. The material will be an essential data for the preparation of periodic reports for the state parties in each country.

In particular, the introduction of the system is considered significant since it is in line with one of the important tasks of the reforms of the United Nations under the regime of the 8th UN Secretary-General Ban Ki-moon, and under the continued regime of the 9th Secretary-General Antonio Guterres. This conference was also promoted as the first cooperation between the fields of culture (the Living Heritage Entity) and education within UNESCO.