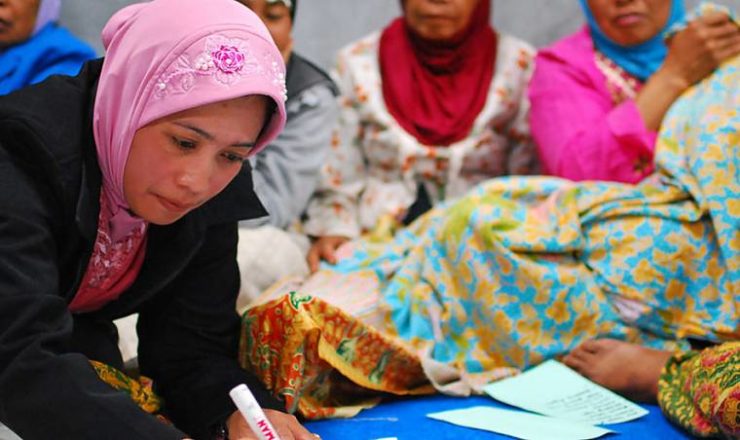 In Yogyakarta, Indonesia, women at a community meeting discuss the reconstruction of their village in the wake of the 2006 tsunami and earthquake. © World Bank/Nugroho Nurdikiawan Sunjoyo

On the International Day for Disaster Risk Reduction, the Living Heritage Entity highlights the role that intangible cultural heritage can play in mitigation at every step of the disaster management cycle, from preparedness through to response and recovery.

The 2003 Convention’s work in disaster contexts is guided by the operational principles and modalities for safeguarding intangible cultural heritage in emergencies, which were approved by the General Assembly of States Parties to the Convention just last month during its 8th session (Resolution 8.GA 9), following four years of reflections to elaborate them.

Through a series of commissioned reports and meetings, UNESCO has sought to deepen awareness and understanding of this dual role, and of the importance of integrating intangible cultural heritage within disaster risk reduction frameworks and practices.

Projects supported under the Convention’s International Assistance mechanism and UNESCO’s Heritage Emergency Fund have highlighted the contribution of intangible cultural heritage, such as knowledge and practices concerning the climate, to the reduction of risk, recovery from natural disasters, and mitigation of climate change impacts. Other important contributions include contributing to the prevention of violent extremism and the important role of living heritage for communities facing forced displacement.

Building on this work, and in the framework of its global capacity-building programme, UNESCO has developed training materials on integrating disaster risk reduction into inventories of intangible cultural heritage. Thanks to a generous contribution from Switzerland to the Intangible Cultural Heritage Fund, these training materials will be piloted in Honduras and the Philippines in 2021 to strengthen awareness of the relationship between intangible cultural heritage and disaster risk reduction among communities vulnerable to disasters impacts.