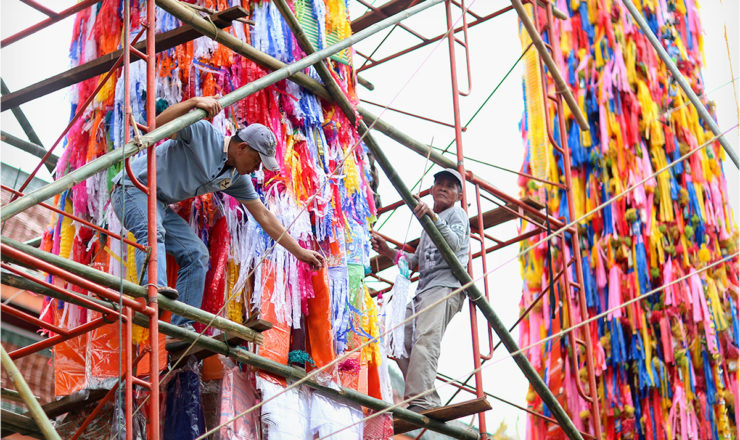 Held in the twelfth lunar month of Thai Buddhist calendar, Salak Yom Festival is a tradition of the Yong people in the northern province of Lamphun, Thailand. It used to be a merit-making rite of passage for young Thai women of marriage-ready age, but by mid-twentieth century it started to fade away due to the high cost of individual donations. Starting 2004, however, as a result of collaboration between many local enthusiasts and the Buddhist temple Wat Hariphunchai Committee, the festival was re-established on slightly different grounds. What was too much of a burden for the young brides-to-be was transformed into a communal activity. In the present time, tall and neatly decorated Salak Yom trees are the hallmark objects of the festival as they are prepared and donated by the members of local communities working together. A competition was initiated when the festival was reintroduced. Through provincial sponsorship, prizes were awarded to those who created the tallest and most beautiful trees. This increased the number of participating villages; and the trees have grown way taller compared to their original form.

The merit-making aspect of the contemporary version of the festival takes quite a peculiar form. Since the trees are decorated not only with colorful paper leaves and flowers, but also with various objects quite useful for everyday life—clothes, packaged food, household products, and even bank notes—as donations to the monks of the local monasteries. The monks, however, are not expected to keep all of those items but share them with those in need. Lottery decided which community’s donations are received by which monks. So during the last day of the festival, each community’s representatives are waiting in the tents erected precisely for this purpose while numerous monks are wondering around with papers saying whom exactly they are getting donations from this year. Despite the religious idea underlying this entire activity, its atmosphere resembles more that of a fair.