ICHCAP’s 2018 Work Plan Has Been Confirmed 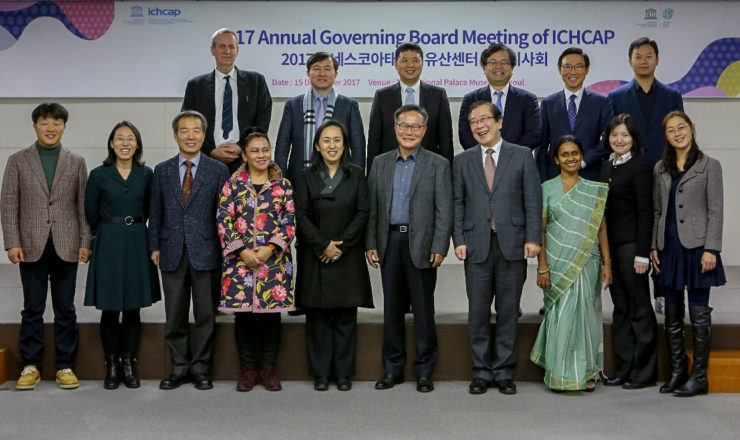 ICHCAP’s major projects for 2018 were confirmed at the 2017 Governing Board Meeting that took place on 15 December 2017 at the National Palace Museum of Korea. ICHCAP’s eleven governing board members and relevant members of the Cultural Heritage Administration, the Korean National Commission for UNESCO, and other UNESCO ICH category 2 centers from China and Japan attended.

ICHCAP reported the progress and current issues of its 2017 projects and appointed four new board members:

ICHCAP’s work plan and budget for 2018 were approved. (See the table in the next section.) ICHCAP’s main functions were amended in the Korea-UNESCO Agreement for Establishment of ICHCAP, which was passed during the 202nd UNESCO Executive Board Meeting (202 EX/18, 13 October 2017). The plan focuses on enhancing information-sharing mechanisms and diversifying networks in accordance with the amendments. The plan emphasizes a shift from collecting and accumulating data on ICH lists to a systematic flow of information (collection, analysis, processing, and distribution) and better distribution of information on ICH safeguarding activities.

ICHCAP will also raise awareness about ICH by publishing books and periodicals, including the ICH Courier, the ICH Courier e-Newsletter, a collection of case studies on NGOs’ activities, and the ICH & Society Book Series. It also plans to support ICH events such as ICH film festivals and enhance planning capacity to explore future projects.
Your continued interest and support for ICHCAP’s 2018 activities is greatly appreciated.