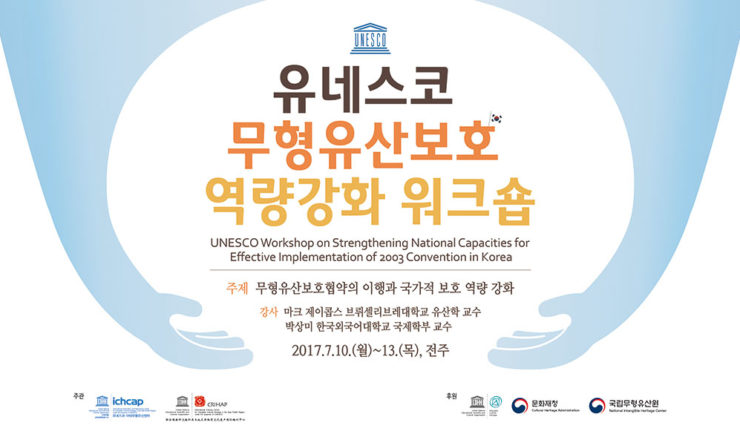 Poster for the capacity-building workshop

ICHCAP and the International Training Centre for Intangible Cultural Heritage in the Asia-Pacific Region (CRIHAP) will co-host the UNESCO Workshop on Strengthening National Capacities for Effective Implementation of 2003 Convention in Korea at the National Intangible Heritage Center in Jeonju, Korea, from 10 to 13 July 2017. The workshop, sponsored by UNESCO and the Cultural Heritage Administration of Korea, targets local government officials in the field of ICH. The first of its kind in Korea, it will be held as a part of the program that UNESCO has been operating since 2008 to strengthen national capacities for implementing the 2003 Convention. UNESCO has selected topics based on local or national needs and demands, including the convention implementation at the national level, community-based ICH listing, applications for inscription, and ICH safeguarding planning.

As the host of the first UNESCO ICH capacity-building workshop to be held on the peninsula, Korea fosters a thick history of cultural heritage safeguarding. For over a century, it has shown an active engagement on cultural heritage, both tangible and intangible, from issues of heritage policies to how the law can protect traditional culture. The workshop is meant to encourage pertinent discussions around these subjects and other pressing concerns emanating from different places, not just Korea, as a proactive effort to understand the new chapter to the Operational Directives of the 2003 Convention and to explore culture-centered strategies for local development.

The workshop is composed of sixteen sessions; two facilitators1. will take charge: Prof. Marc Jacobs of Critical Heritage Studies at Vrije Universiteit Brussel and Prof. Sang-mee Bak of International Studies at Hankuk University of Foreign Studies. The first-day sessions will cover topics such as the main concepts of the 2003 Convention; the 2003 Convention and the Convention Concerning the Protection of the World Cultural and Natural Heritage; and raising awareness about ICH. On the second day, lectures will be provided on ICH safeguarding, applications for inscription, development of ICH safeguarding policies, and revision of domestic laws on ICH. The third-day sessions will include lectures on ICH and sustainable development and community participation, followed by case-study presentations of community leaders and a Q&A. The fourth-day sessions will provide the participants with an opportunity to learn about safeguarding plans and how to establish them by themselves, culminating with team presentations.

The participants are expected to spread the contents and spirit of the convention by organizing small workshops for ICH communities and reflect their take-away on international issues (sustainable development, gender equality, etc.) in their local ICH policy decisions. Meanwhile, ICHCAP plans to expand the workshop to NGOs, research centers, and other organizations in the field of ICH.