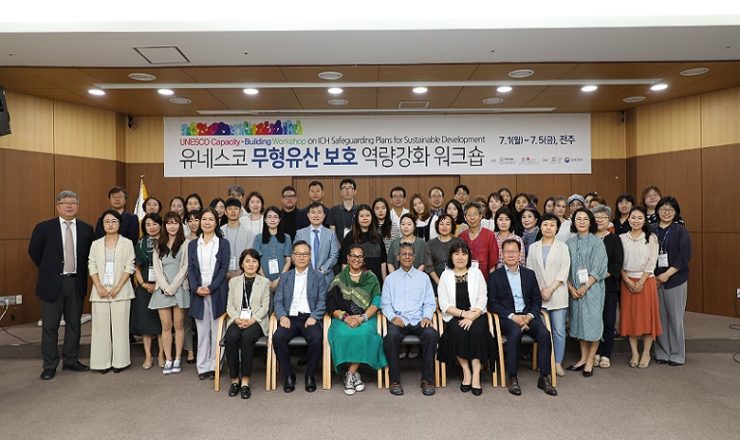 The UNESCO Capacity-Building Workshop on the ICH Safeguarding Plan for Sustainable Development was held from July 1 to 5, 2019. Co-hosted by ICHCAP and the International Training Centre for Intangible Cultural Heritage in the Asia‐Pacific Region under the auspices of UNESCO (CRIHAP), the workshop offered twenty-seven participants, including ICH experts, researchers, and practitioners in Korea, a chance to learn about sound relationships between safeguarding ICH and sustainable development. The workshop sessions were facilitated by Deirdre Prins-Solani, Director of Deirdre Prins-Solani Heritage Consulting (South Africa), and Rahul Goswami, Advisor at the Centre for Environment Education Himalaya (India). The sessions comprised not only lectures by the facilitators, but also information sessions on sustainable development in the Korean context; Korean legislation and policies; group work; and a field trip. The participants were encouraged to involve themselves fully in the activities so they could put what they had learned into practice.

The opening ceremony was honored by the presence of ICHCAP Director General Gi Hyung Keum, Yuqing Ge, director of CRIHAP’s Training Division, Director General Gye‐sik Kim of the Heritage Promotion Bureau of the Cultural Heritage Administration of Korea, and Director General Yeonsoo Kim of the National Intangible Heritage Center. The first session offered an introduction to the workshop and the convention, touching upon the broad concepts that would be covered during the workshop. The lecture was given by Professor Taekyoon Kim from Seoul National University, with the theme of Sustainable Development Goals and their implementation in the Korean context.

On the second day, the participants took a multifaceted approach with presentations and group work about gender equality, intellectual property rights, and ICH. There were, in particular, discussions about gender roles, transmitting subjects and realms, and social influences centering on Kimjang culture. It was emphasized that in terms of understanding the relationship between gender equality and ICH, social power structures have a significant effect. Regarding intellectual property rights, registering ICH on the UNESCO list doesn’t mean authorizing a patent right, but also exercising ownership of ICH. This highlighted the gap between UNESCO’s orientation and the internal perspective, leading to heated discussion.

The third day featured a field trip to Dangjin. During visits to two places—the Museum of Gijisi Juldarigi and the Myeoncheon Dugyeonju (Korean traditional Azalea Liquor) Training Center—participants had time for question and answer sessions with experts on agriculture, natural resources, safeguarding activities, transmission systems, and so on.

In the morning session on the fourth day, Dr. Seung-bum Lim from NIHC gave a lecture about Korean legislation and policies. He delivered the message to participants that they must think what should be considered in establishing safeguarding plans under the current system. Later, sessions were led by facilitators with the title ‘Enablers beyond Culture’, focusing on the case of India: safeguarding ICH and sustainable development, economic efficiency, and dilemmas. In a wrap-up session on the last day, every participant had the chance to speak about what they learned, and what had changed compared to the first day.

At a glance, it seems that safeguarding ICH and sustainable development contradict each other, although the core conclusions of this workshop were sustainability means utilizing materials and supporting realization of ICH. In addition, the meaning of ‘safeguarding’ was established as action by stakeholders that makes ICH sustainable through various laws and responsibilities. ICHCAP will endeavor to broaden the concept of safeguarding ICH and its implementation—it is hoped operating on the same page as UNESCO—and to develop the concept of sustainable development with various stakeholders in Korea.