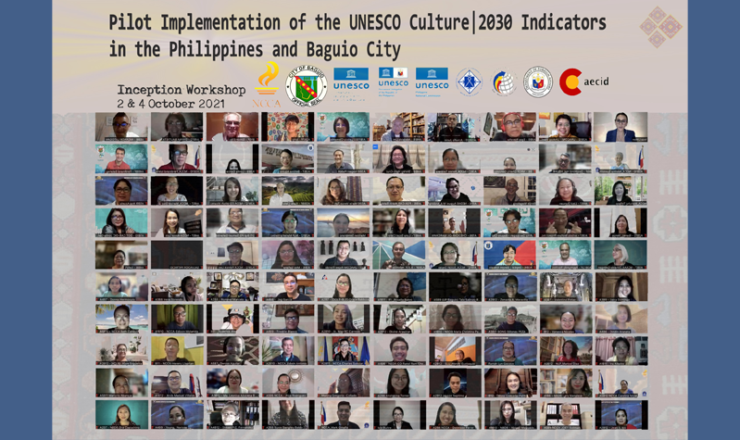 The pilot implementation of the UNESCO Culture 2030 Indicators in the Philippines and Baguio City was officially launched with an inception workshop. The workshop, conducted online via Zoom on 2 and 4 October 2021, gathered more than a hundred participants representing national and regional government agencies, civil society organisations, the academe, private sector, and other competent entities whose work is informed by culture. The event was graced with remarks from Dr. Jyoti Horsagrahar, Deputy Executive Director of UNESCO World Heritage Centre, Mr. Arsenio “Nick” Lizaso, Chairman of the Republic of the Philippines’ National Commission for Culture and the Arts (NCCA), and Mayor Benjamin Magalong of Baguio City. Led by UNESCO Regional Expert Professor Desmond Hui, with support from UNESCO International Expert Dr. Simon Ellis, the workshop, composed of four sessions, was designed to primarily provide an orientation for the key components of the implementation namely data mapping and screening, development of work plan, and policy review.

The UNESCO Culture 2030 Indicators, formulated from 2017-2019, is a four-dimension methodology with twenty-two indicators meticulously calculated to measure the multiple ways in which culture contributes to the economic, social, and environmental aspects of sustainable development. Intended to be implemented on a voluntary basis by countries and cities, the instrument enables an opportunity to get evidentiary data of culture’s transformative role, making it more visible and tangible, complementing the globally agreed upon Sustainable Development Goals (SDGs).

Ascertaining the contribution of Philippine culture to the country’s sustainable development in terms of environment and resilience, prosperity and livelihoods, knowledge and skills, and inclusion and participation, the implementation is provided with intelligence support by an inter-agency committee composed of the Philippine National Commission for UNESCO (UNACOM), Philippine Statistics Authority (PSA), National Economic Development Authority (NEDA), and the NCCA as the lead agency. The implementation efforts at the national and local levels, are supervised by Ms. Marichu Tellano, Executive Director of the NCCA. It is the first in the Asia-Pacific region and amongst the global pilot alongside Burkina Faso, Portugal, and Colombia.

Recognising the role of culture as emphasised in the Philippine Development Plan (2017-2022), particularly in regards to pandemic relief and recovery, a comprehensive understanding of how culture operates in various sectors will primarily legitimise a culture profile of the country for Filipinos to appreciate and share with other UNESCO Member States.

Significantly, the implementation of the instrument has implications on the future of ICH in the Philippines. Because UNESCO Culture|2030 Indicators seek wide-ranging data for expenditure on heritage, sustainable management of heritage, the role of ICH in climate adaptation and resilience, and cultural knowledge the implementation may give rise to a more robust adoption of resilience measures in the design and use of intangible cultural assets across the country, with meaningful attention on diversity, indigenous knowledge, and ICH transmission. ICH is certainly involved across the twenty-two thematic indicators of the instrument, helping the Philippines at the national and local levels to pursue culture-sensitive governance and development. Furthermore, through the implementation activities, Baguio City, named as a UNESCO Creative City in 2017, may have more opportunities to be a model locality and share their best practices in ICH safeguarding, as well as protecting built heritage.

At large, the implementation of the UNESCO Culture|2030 Indicators in the Philippines reinforces the role of culture and heritage, particularly ICH, as the fundamental basis to strengthen values and identity, and enhance the quality of life in all of Philippine archipelago.