Humor and Commemoration in the Newar Community of Nepal 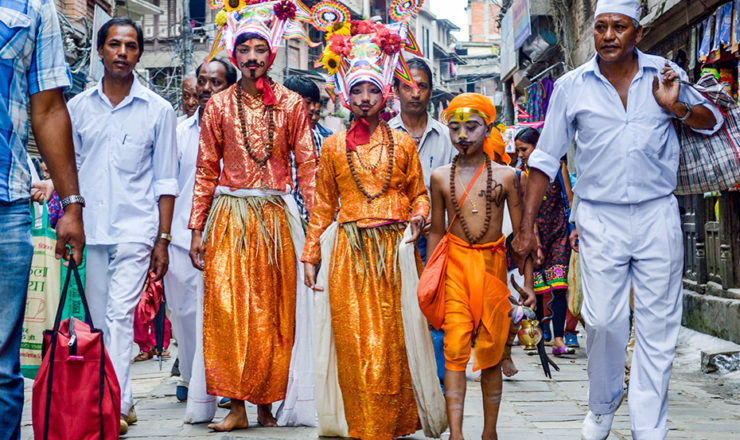 The Newar community of Nepal celebrates a festival known as Sa Paru (Procession of Cows or Festival of Cows) every year on the first day of the waning moon of Bhadra (between August and September). It fell on 27 August this year. On this day, people take cows to the streets for a procession throughout the ancient city. They also take young boys dressed as gods, carrying traditional musical instruments. Others join the procession with incense sticks. Two important components of the festival are entertainment value and religious piety. This is why people make sure the festival is a fun event and at the same time a space where they can demonstrate kindness to each other by giving and sharing water, juice, or milk.

The ancient tales regarding the origin of this festival date back to the seventeenth century, the time of death of the young son of King Pratap Malla. Seeing the queen inconsolable, the king started a procession of his kingdom’s common subjects who had lost their loved ones the same year. This was the king’s way of showing the queen that she was not alone in experiencing the pain of losing someone important; that other people, rich and poor, are equally vulnerable to loss and suffering. Even though the king of Kathmandu is believed to have started this procession, other cities like Bhaktapur and Patan also celebrate the festival. Without a doubt, it is also celebrated in other cities throughout the country where the Newars of Kathmandu Valley migrated and settled.

A distinctive aspect of the festival is that humor has an oddly thematic attribute about it. People go on the streets dressed as various funny characters; some men are even dressed as women. This humor tendency of the festival is known as khyalaa. A reading of this in the context of the festival could be that humor may help people go through the sometimes intoxicating process of mourning and commemoration; that laughing about loss could be a way to deliver oneself from the pain. Furthermore, the humor tendency of the festival also serves as grounds for local actors to organize street plays satirizing the government. During times of strict political regulation and censorship, this festival provided artists with the freedom to express their dissatisfaction, giving the general public a chance to feel that their sentiments are still relevant. In contemporary times, these street plays are not as common as they were, but some villages and towns in Kathmandu Valley like Pyang Gau and Kirtipur continue the street plays. Now the dynamics and operation of plays during the festival are changing; most are commercially organized in public venues and theaters. At any rate, the festival is remembered as a spectacular union of humor and commemoration.