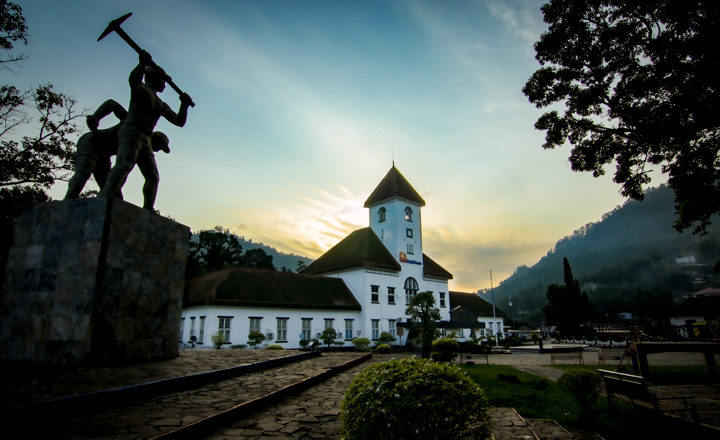 Office of the old coal mine at Sawahlunto, now part of the World Heritage Site © Deri Asta

Based on the Van Lien report released in 1917, in the interior of West Sumatra along the Ombilin River at Sawahlunto, the Sijantang and Pamuatan people had collected coal that appeared on the surface on the river banks to use for cooking and had even sold the mineral to coastal areas along the course of the river, long before the Dutch came and conducted research on energy sources for the industrial revolution.

This activity of the people surely became a reference and the first information for the Dutch geologists to come and conduct research on the coal reserves of Ranah Minang (West Sumatra). C. De Groot Van Embden conducted preliminary research beginning in 1858 and continuing for nine years, carried on by the geologist W.H. De Greve, who finally discovered coal in the Ombilling basin in 1868 and reported the results of his research to the Dutch Government in 1870. Subsequent research by R.D.M. Verbeek succeeded in detailing the results of the discovery by revealing the quality of the coal, which was as high as 7,000 calories with an estimated reserve of 200 million tons, distributed around the areas of Parambahan, Sigalut, Lurah Gadang, Sungai Durian, and Lembah Segar.

Development of an Integrated Megaproject

The potency of energy sources for the industrial revolution found in Sawahlunto were hotly discussed in the Dutch parliament. The officials thought hard how the black coal reserves could be extracted and used for expansion of the area controlled by the Dutch colonialists in Southeast Asia. After debate and more research over the next twenty years, the Dutch government finally designed an integrated project called “Three in One”. The project focused on (1) developing mining infrastructure and then of a mining town at Sawahlunto; (2) developing a rail network, beginning from Pulau Aer Station in Padang, and then in stages up to Sawahlunto; (3) developing Emmahaven Port, which included coal bunker facilities, from where the coal would be shipped to Europe.

We can still see this “Three in One” project, first in the form of the coal mining site and the mining town of Sawahlunto, including the open mining area and the deep mining network and facilities for processing the coal, with supporting facilities of the town built at Sawahlunto. Second, the railway infrastructure and technical facilities including a rack and pinion railway system in the highlands with bridges and tunnels connecting the mining area with the port over 155 kilometers through the mountains. Third, the coal bunker facilities at Emmahaven Port located on the western coast of Sumatra. This was for storing the coal before it was shipped out by sea.

Sawahlunto Mining Town at This Moment

For over a century, the product of mining in Sawahlunto contributed to moving the wheels of development of infrastructure in various areas of Indonesia, especially in West Sumatra. Besides this, the technical achievement in deep mining and integrated infrastructure development provided a model for development of mining activities in various regions of the world. Although the mining activities no longer go on, yet the results of the development that took place in the form of heritage buildings and experience (in the form of cultural traditions) gained can still be felt by the people even now. Sawahlunto is proof of the effect of the industrial revolution that had taken place. The mining has ceased. Yet the footprints of the mining town are safeguarded as an attraction of West Sumatra.