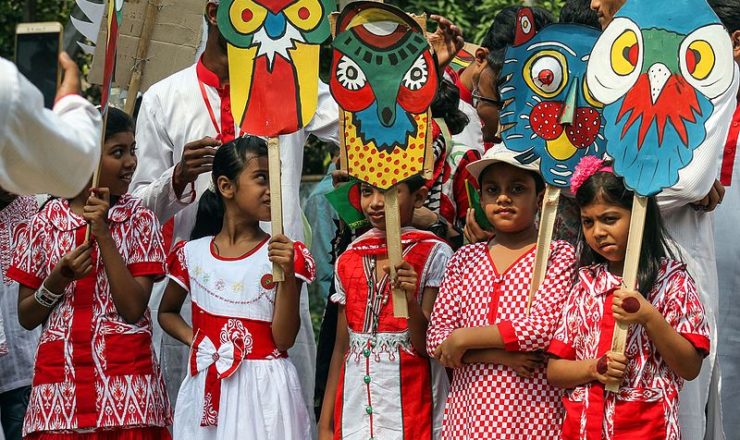 Pahela Baishakh is the first day of the Bengali calendar. It has been celebrated within urban and rural communities since Mughal emperor Akbar inaugurated it in the fifteenth century to align with harvest season and tax collection. Irrespective of its name or origin, it has become a celebration across all faiths, castes, classes, creeds, genders, or ages, which makes it a secular identity of Bangladeshis and a way to voice against communal fundamentalism and promote unity and solidarity. The colorful procession that is an integral part of today’s Baishakh celebration is Mangal Shobhajatra.

Mangal Shobhajatra literally means ‘procession of well-being’. The procession is a cultural affair deeply rooted in the Bengali tradition of making clay dolls, pots, and other decorative pieces. It is said that Charupeethh, the cultural organization first organized the procession in Jessore in 1985 to celebrate the Bengali new year with puppets, masks, and music. In 1989, the students of the Faculty of Fine Arts of Dhaka University observed Mangal Shobhajatra for the first time in Dhaka and used it as to overcome their frustration with the existing military dictatorship. The people behind it were Mahabub Jamal Shamim, Moklesur Rahman, and Heronmay Chanda.

The procession usually has three themes—one set shows oppression and evil, a second theme represents people’s courage and strength to overcome the said evil, and the last theme reflects peace and solidarity of the people. This year’s (1424 Banggabda/ Bengali year) theme was to look toward light with the slogan “Anandaloke Mangalaloke Biraja Satyasundara” from Rabindranath Tagore’s line.

As in previous years, this year’s Mangal Shobhajatra drew thousands of participants from different walks of life. The participants carried colorful masks and floats of flowers, birds, animals, sun, and other motifs while the sun stood as a calling to come toward lights, shunning the darkness. The symbolic sun with its two shades—one is bright and the other is dark—represented two shades of human nature. Fish and birds on the other hand highlighted the cultural heritage of the country while the elephant symbolized prosperity. After the procession, the masks are often given away or sold as part of a charity fund drive.

In 2016, the Intergovernmental Committee on Safeguarding Cultural Heritage of UNESCO registered the Mangal Shobhajatra on the Representative List of the Intangible Cultural Heritage of Humanity. It added a new dimension of celebration this year as the government of Bangladesh organized the procession across the country. West Bengal, India, also brought out the traditional Mangal Shobhajatra in 2017.