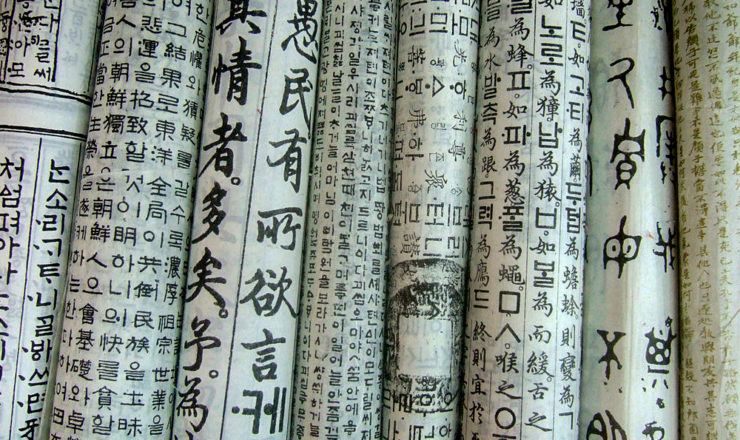 There is a rich tradition of hand papermaking in East Asia that is still alive today. In Korea, hanji (traditional paper) making remains a distinguished cultural activity. According to many studies, such as the one conducted by Minah Song and Jesse Munn,1. different methods and materials in making hanji are tested to gauge permanence and durability. This is done because traditional Korean paper serves many functions, from it being a primary element in architecture and interior design to the versatility of hanji in art-making and recreation. More importantly, conservation of traditional hand papermaking in Korea is given attention because hanji is culturally symbolic of Korea being a nation of literacy, a nation that believes in the power of reading and writing. Aimee Lee, a leading hanji researcher, has carefully documented many ways in which hanji may be perceived: as a traditional process in a highly digital world, as a practice appropriated in North America, as an art made by hand, and as a performance of conservation. All of these lenses bring to the fore how intentional the process is and how meticulous one has to be to make a paper according to traditional knowledge.

From 5 to 7 May 2018, the most traditional city of Korea, Jeonju, saw the return of the Hanji Culture Festival. The festival was a reminder of hanji importance, but it also showed the evolution of hanji, specifically on how hanji can be integrated into modern life.  On the first day of the festival, p’ansori singer Nani Kim and calligraphist Lucia Choi opened the event with performances. The twenty-fourth National Hanji Craft Competition Awards Ceremony followed. The works of the competition winners as well as those of invited artists were on display for the entire run of the festival. The festival certainly was not short on performances: a hanji puppetry called “Ariari Puppet Play” was showcased. If not the most, one of the most anticipated segments of the festival was the 2018 Jeonju Hanji Fashion Competition and Show. It was a very special part of experiencing how important hanji is because it educated people on the transformative capability of hanji: that Korean traditional paper can actually be transformed into textile.

Like other traditional handicrafts, hanji takes an important place in Korean heritage, allowing the possibility of witnessing timeless values that hold the nation together. It is for this that appreciation and conservation of hanji should be in place especially now that traditions are situated in global societies run by high technology.