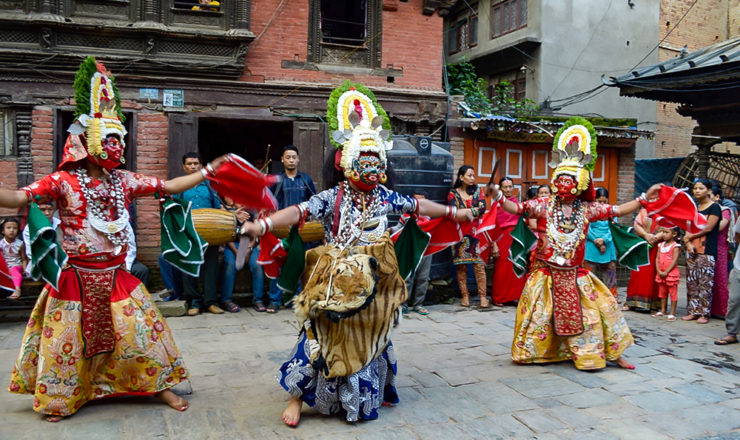 Kathmandu Valley is also known as the city of temples with stupas, shrines, and statues in every nook and corner of the historic centers. Festivals and rituals unfolding throughout the year make the place even more outstanding. It would be interesting to know how most of these monuments and festivals have survived for over hundreds of years.

The Newar people, or indigenous people loosely identified as those living in Kathmandu Valley, are accustomed to caste, locality, and the system of guthi. Guthi refers to social associations with objectives similar to a format of trusts that play an important role in safeguarding both tangible and intangible heritage. It is still a backbone for the continuity of most festivals, rituals, and traditional practices in Kathmandu Valley.

In Nepal, every household is a member of at least one guthi formed for a specific purpose, like taking care of temples, performing mask dances, playing musical instruments, lighting butter lamps, taking care of stupas or bridges, and many more. Among many types of guthi is si guthi or sana guthi, which means being in charge of the cremation ceremony. Another example is twa guthi or the responsibility of male family members to be serve a certain function for their caste—teaching traditional musical instruments and taking care of specific temples, rituals, and festivals are exemplary functions of twa guthi.

One of the important aspects of the guthi system is the land endowment for sustaining guthis. In ancient times, wherever the temples were built or whenever festivals were initiated, the land was endowed to guthi. From the revenue generated from the given land, guthis paid priests, masons, craftsmen, artists, and others. In Nepal, it was not only kings and royals who did such endowments but also regular people. There were several reasons for this. People donated land for various purposes, such as religious piety or to fulfill the obligation one’s social status affords; moreover, this was done to avoid the state confiscating the land in times of political unrest. Once it was endowed to the god, to revoke it would be considered a great sin. Due to these reasons, there were many guthis and sufficient funds to safeguard several hundred temples, festivals, and rituals.

In the early phases of Nepali history, land endowments were taken by the state and rulers for their personal use; eventually repossessed lands were used to construct public buildings. The nationalization of guthi lands was a major setback to the indigenous community. Many guthis disappeared due to lack of the funds and rapid modernization of Nepal. The guthi system is not taken seriously in formal heritage conservation practices. If timely measures are not taken, then this unique practice will not survive long.