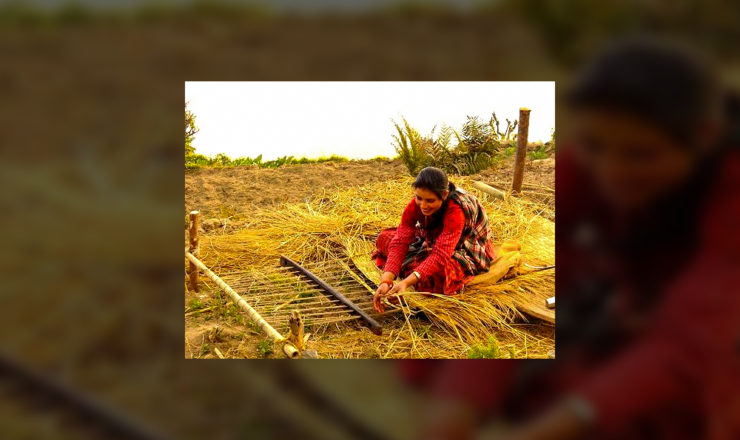 Made up of hand-woven rice straw, gundri is used as a sleeping bed and sitting mat and for drying pulses and grains, especially in the countryside. People, peasants in particular, fold gundri into a vertical circle where they store rice and grains; it is called vakari. Giving gundri as a wedding gift is also a practice in Nepalese culture. In performing cultural and religious activities, chokho gundri (pure mattress or newly made mattress) is used.

Only the Nepalese with special knowledge and skill can make gundri. In October and November after rice is harvested, they save long and flexible rice straw to make gundri. Women start making gundri from November to February. A rectangular wooden framework with a rope, known as taan, is needed to make gundri. A long horizontal wooden frame with a rope called hataso is used to combine and tighten the straw. Normally, it takes three to four days to complete one gundri. However, the size of gundri determines the time to make it.

Selling gundri is also a source of income for Nepalese women in the countryside. They normally sell it within the range of NPR 400 to 500, depending on the size, and it can last for three to four years. The increasing urban lifestyle of the Nepalese and the preponderance of mass-produced mattress make it difficult for handmade gundri to compete in the market, which has resulted in diminishing interest making and using this traditional Nepali mattress. Consequently, during the major festival season (October to December), some NGOs based in Nepal run gundri-making workshops and exhibitions to increase public attention to revitalize traditional knowledge of gundri and empower women, the major producers of the mattress.