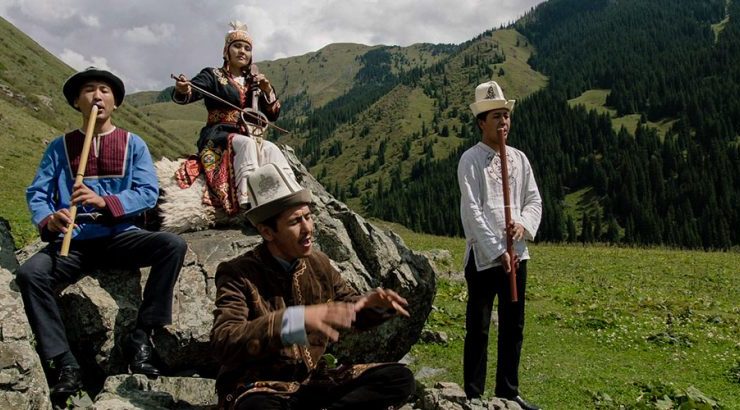 Still frame from one of the project videos © EBS

Natural environments and lifestyles in the Asia-Pacific region are changing fast amidst rapid urbanization and westernization. There are urgent needs, therefore, to safeguard and archive intangible cultural heritage (ICH) that has been transmitted for many generations in the region. Recently, media-based ICH safeguarding activities have been drawing attention. As part of an ICH safeguarding project that involves video documentation, three UHD documentaries on Central Asian ICH have been produced, and they are being broadcasted on 28 September, 12 October, and 19 October.

Navruz is a traditional ancient festival celebrated most widely in Central Asia. Navruz, which literally means “new day,” was listed on UNESCO’s Representative List of Intangible Cultural Heritage in 2016. The documentary follows Aziza, an eight-year-old girl, looking into the festival.

The Kyrgyz epic trilogy of Manas, Semetey, and Seytek, which was listed on UNESCO’s Representative List in 2013, is one of the greatest examples of epic poetry, consisting of over 500,000 lines. The documentary introduces the epic trilogy as well as the Kyrgyz traditional music of shashmaqom against the beautiful natural backdrop of Central Asia.

Nomadic culture has been preserved for over a thousand years alongside Mother Nature in Central Asia. A ‘yurt’ (2014 UNESCO’s Representative List) is a portable tent used as a comfortable dwelling by nomads. A shyrdak(2012 UNESCO’s Representative List) is a carpet that has been transmitted by Kyrgyz women. The documentary introduces these ICH traditions that are globally valued. One can also see the special culture and relations between men and horses through kok-boru, an ancient horse game played by male members of nomadic communities.

ICHCAP formed the project consortium with EBS and the Asia Culture Center (ACC) in 2016 with the objective of producing videos and developing contents to safeguard and promote regional ICH based on their respective expertise. EBS has since been engaging in video documentation through ICHCAP’s cooperative network. ACC is also planning to hold a special photo exhibition on Central Asian ICH in November.