Gohori: Craft of Making a Series of Baskets 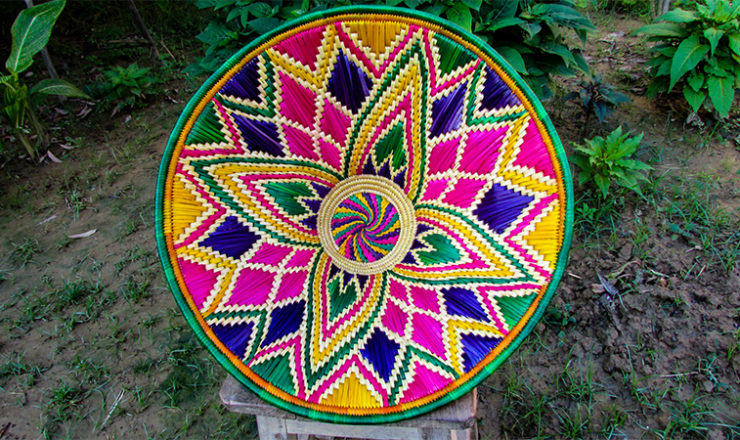 The Tharu people, who predominantly cover the east to west region of southern Nepal, have always worshiped nature and natural resources. These have been a significant part of their livelihood, contributing to their culture, economy, and ecology. Tharu women have age-old basket-making and weaving practices with vegetation and raw materials available in the area. The majority of these women are engaged in continuing this craftsmanship. While the history of basketry is not well documented, it is believed to have started from a primeval age, being an integral part of the community’s sustainability. Since there is no direct evidence on how these baskets have originated, we rely on mythological tales. One story tells us that a woman named Jasu taught a man, Ishu, how to irrigate the land during the human civilization. She also taught basket making and other forms of crafts, which is how it has been able to be passed down through generations.

This intergenerational skill is a legacy continued through generations where girls learn to weave from their mothers and grandmothers, mostly for their trousseau. The craft of making a series of baskets is called a gohori. These colorfully designed baskets are used in special ceremonies and for storing and carrying grains and vegetables, clothes, and other valuables. The women take inspiration from nature and coil the baskets with different patterns, locally termed as panwa with the objects and shapes they observe, especially plants and animals. The most commonly used pattern is called gargijarwa thanhwan, which is a technique of coiling that resembles a millipede. This intricate weaving coupled with different patterns is considered an exclusive skill of women, and the baskets are coiled and decorated with shells, tassels, peacock feathers, and flower seeds.

Some other baskets include a small coiled basket for keeping spices known as, nuiya, and pantopni, a colorful coiled designed lid basket for covering a water pot. Dhakiya, is coiled in different patterns reflecting the objects around and used for carrying pahur, gifts to relatives, are some of the significant woven series. Similarly, delwa is an important series coiled in different colors and decorated with shells and beads on its edge with strands of threads. This is used to carry the clothes of the groom and ornaments and other valuables of the bride. Bhauka is a big storage basket with a lid. It is used to store clothes and valuables and is hung above with a rope inside the room.

Basketry has played an essential role in family life and marriage. Earlier, when the community practiced child marriage, a child bride was sent back to her natal home to practice basketry and spend time with the family. After she learned the necessary skills, she would come back to live with her in-laws. Once she carried the series of baskets and presented them to the family members, she would then be considered a qualified daughter-in-law. The skill may seem like a bridge for two families; however, it also strengthens Tharu women’s agency, love, and respect with mothers and mothers-in-law. Traditionally, mothers would feel secured for their skillful and qualified daughters if they took a series of baskets as their dowry. Therefore, basketry has become an essence for marriage ceremonies and has worked to bond and strengthen relationships between families.

Intergenerational knowledge is central to transferring skills and information around the use and curation of plants and craftwork. Cultural transmission between the work and knowledge of the crafts is vital for maintaining a sense of community and identity. However, with very few young generations motivated in continuing this craft, the skill is dying out. Cheap plastics are replacing the functionalities of these indigenous baskets. Bhauka making is near extinction, and delwa struggles to be purchased from the very few existing weavers. The practice that was a medium of exchanging gifts and connected two families is now limited to stories. The basketry not only portrayed the beautiful skill of Tharu women but also depicted love for nature, passion for weaving, and sustained the relationship between nature and culture. Therefore, there is a great need for documenting this intangible heritage and recording the narratives for archives.