Gavari: The Unwritten Epic of a Mewari Tribe 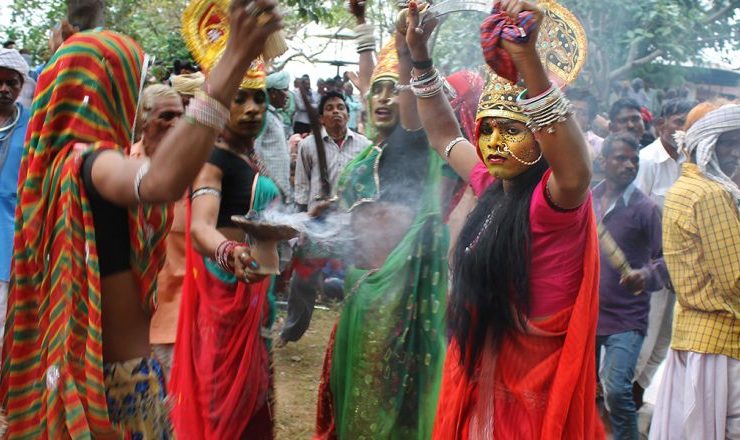 Kalika is a Hindu goddess. Also known as Ambav and Gauri, she is a symbol of energy and female power for which she is worshiped by Bhil tribe of Mewar in a forty-day ritual called Gavari. The timeless, spiritually-motivated, and electrifying dance-drama is a crucial part of the rich Mewari tribe tradition. Their performance—a synchronized amalgam of ritual, dance, music, myths, folklore, and theatrical plays—can be a truly mesmerizing cultural experience. It needs not a formal stage yet maintains an attraction that keeps the audience engaged and involved.

Generally, the colorful Gavari performance holds on to the theme of “victory of the divine against the demon” and creatively retells folk tales, myth, and history, incorporating satire and contemporary issues in its short episodes. Performed only by the male members of the Bhil tribe, Gavari starts with and maintains a mimesis of the female power of Kalika. It is typically performed by ten to fifty members of the tribe, who are from different age range and have varied roles in the performance. Each performance has a vital message combined with spiritual invocations, which makes its telling more effective. The rising beats of Madal intensify the atmosphere in such a way that the audience can get into trance. Members of the Bhil tribe believe that they can be cured by the blessings of the main priest or by Kali. The Gavari performance splendidly presents stories carrying tribal wisdom. It also affirms simplicity, equality, communal harmony, consciousness, art appreciation, and upmost environment protection for sustainable development.
Effects of modernity and globalization reaching tribal areas in India, however, have molded an abrasive attitude toward practices known to be “traditional”. In the last couple of decades, it was observed that the younger members of the Bhil tribe have less interest in keeping their tradition alive. They prefer to work as laborers than learning and performing Gavari. Gavari performance is seen to have no worthy benefit and thus must not be actively transmitted. This alarming situation may banish the purest form of performing art along with its music, stories, folk tales, songs, divinity, and wisdom, all particular to the southern part of Rajasthan, India.

The biggest challenge in safeguarding Gavari is to bring its identity and pride back to restore the ignored cultural heritage of Mewar. Enhanced visibility of Gavari performance at both national and international levels could help in realizing its socioeconomic benefits. Documentation, digitization, and dissemination art are very much needed to relocate this Gavari and its wisdom to next generations in a systematic manner. Through efforts of NGOs working in the ICH field such as the publication of the first pictorial book on it, film, and website, it is possible for people to have vicarious access to Gavari. Notwithstanding, more efforts are needed to protect the heritage of Bhil tribe.