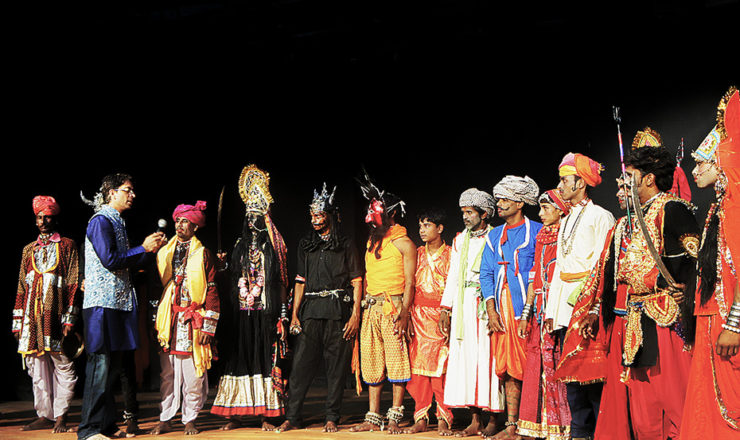 Dramatist/project coordinator, Lokesh Paliwal, adapted the classic Bhiyawad story for this presentation, based on documentarian Harish Agneya’s extensive research. The condensed forty-minute drama exemplifies Gavari’s ritual artistry and celebrates the primacy of the goddess’ energy to protect the social and natural worlds. The gods were powerless against Bhiyawad, the demon king who conquered heaven and earth. The tale relates how Goddess Gavari manifests herself as three beautiful fierce devis who lure Bhiyawad into battle and terminate his evil reign.

On 12 May 2018, a warm appreciative audience filled Shilpgram’s Darpan Hall for the debut presentation; the young troupe responded with great poetic energy. According to the RGP team publicist W. David Kubiak, “this novel experiment offered a rough translated glimpse of Gavari’s spirited artistry, which we hope will inspire people to experience its true power in the villages; and reassure tribal youth that their traditions and values are vital to our collective future, and the outside world is finally listening.”

The Rediscovering Gavari Project supporters are primarily working to raise awareness about Gavari among the people, but they are also striving to inspire more interest and support from public officials. In fact, WZCC Director Furqan Khan escorted the Honourable Shri Raghvendra Singh, Secretary of the Ministry of Culture, to visit Lokesh at a workshop session to receive a copy of the world’s first English Gavari introduction. Together, they hope that increased attention will help preserve Gavari and other threatened intangible heritage treasures.