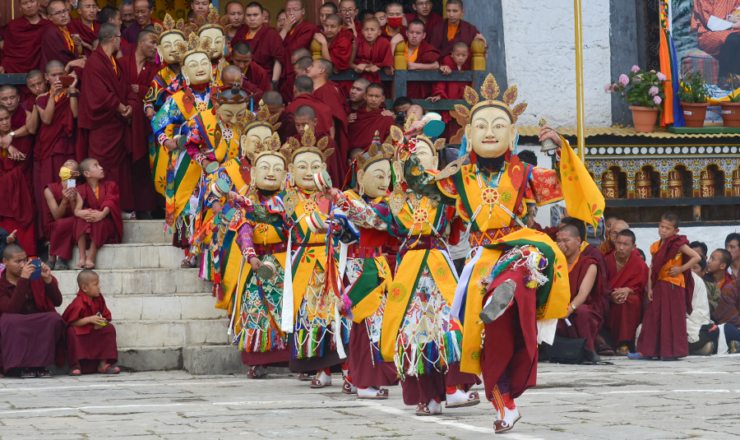 Every year, during the months of September to April, the festivals of Tshechu, Rabney, Mani, Mewang, Choed-pa, Due-choed, Yak-choed, Drub and Drub-chen are conducted simultaneously at various heritage sites; Dzongs (fortresses), monasteries and temples in Bhutan. This event transforms the sites into decorated places filled with offerings in the shrines and the surroundings filled with the resonance of religious musical instruments. It also brings together monks and local communities to jointly perform propitiation and affirmation rituals for the patron deities, along with the presentation of various sacred mask dances. People gather with most enchanting dresses to receive the blessings, say prayers and enjoy the much-awaited festive event.

These sensational dances are generally called Gar-chham which derived from Buddhist terminology. The term gar-chham is composed of two verbs: gar and chham. The various gestures exhibited by the hands are called Gar, whereas the manner of the legs is called Chham. Garchham is considered one of the means of liberation called thong-drol (liberation through seeing), as it helps to mature and realize the primordial Buddha-nature, and reminds one to engage in wholesome activities.

In the 8th century, Guru Padmasambava, a great Buddhist tantric master introduced the Garchham concept in Bhutan and also into the Buddhist tradition in 737 AD. This concept was further popularized by Terton (The Treasurer Revealer) Pema Lingpa (1450-1521) by introducing many sacred mask dances, mostly performed by laymen (community members). These performances are called Boe-chham. Zhabdrung Ngawang Namgyal (1594-1651) also placed more emphasis on the importance of these dances and included them in the curricula of the central monastery under the title Gar-thig-yang-sum (Mask Dances, Proportions [Mandala Drawing] and Ritual Intonation) to embed them in the realm of cultural heritage. The gar-chhams performed by monks are called Tsun-chham. 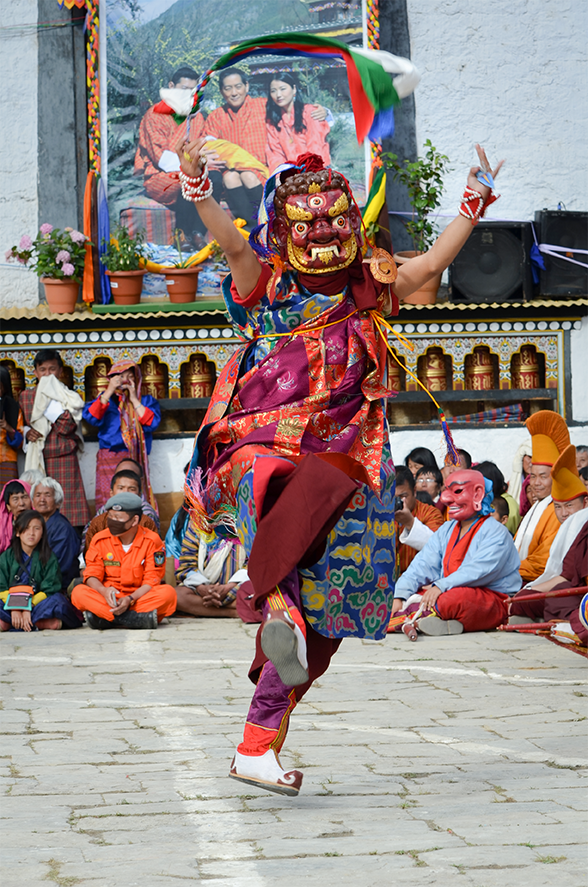 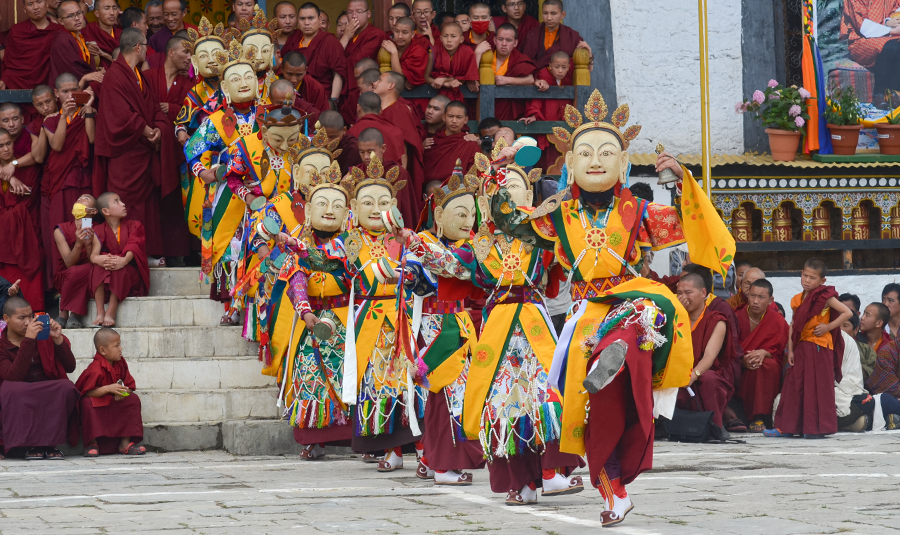 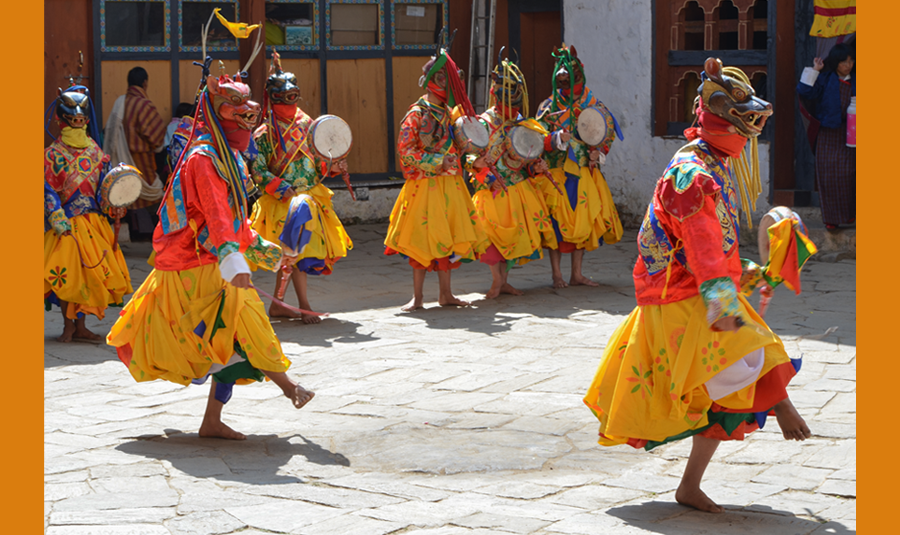 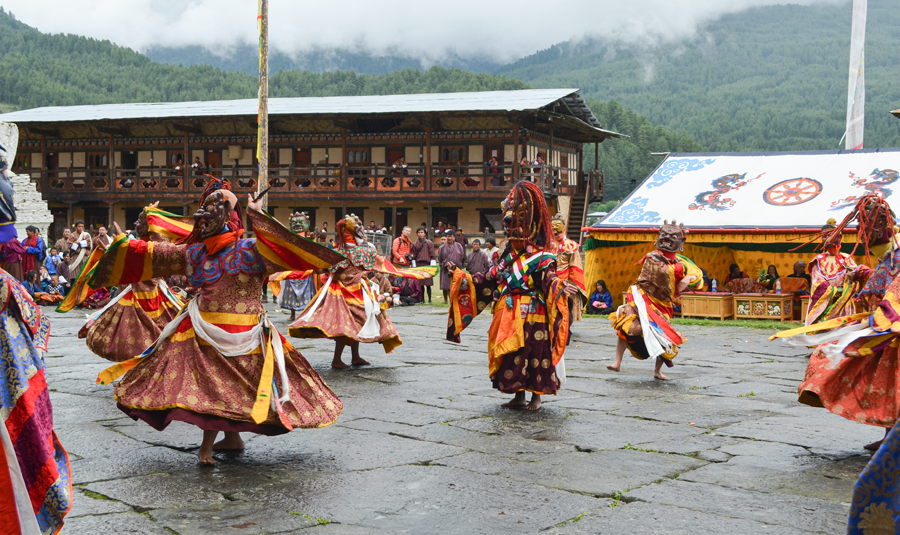 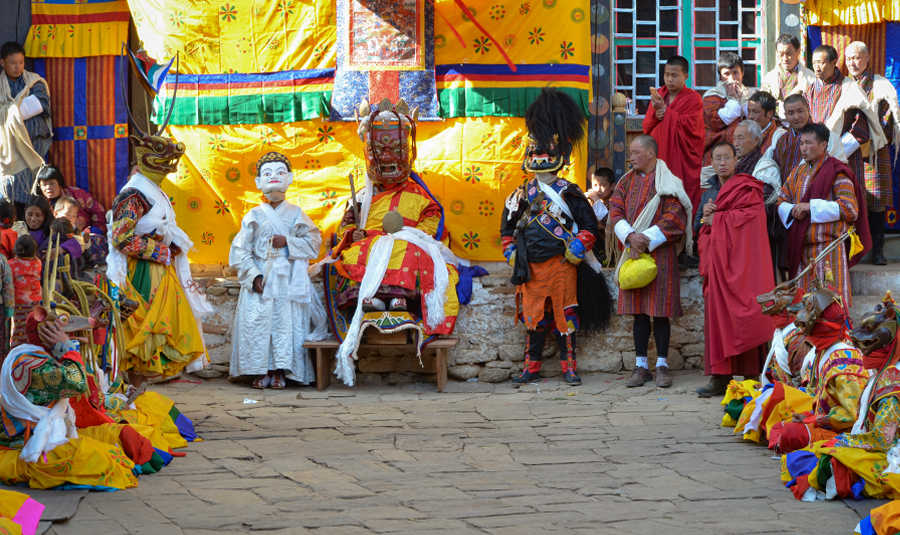 Whether Tsun-chham or Boe-chham, gar-chhams are generally divided into three broad categories: Trul-pai zu-thrul gi gar-chham (manifested mask dances), Ka-ter dag-nang gi garchham (visualized mask dances), and Nam-thar zhi-chol gi gar-chham (biography-based mask dances). The subjugation of evil spirits and the liberation of their impure soul into the realm of Buddhahood through manifestation into pacifying, enriching, magnetizing, and wrathful forms are called trul-pai zu-thrul gi gar-chham. An example of this dance is the dance of the Eight Manifestations of Guru Padmasambava. Similarly, ka-ter dag-nang gi gar-chham are the profound performances of the guardian deities visualized in the meditative state of a spiritual being. Some examples of such performances are the mask dances introduced by Terton Pema Lingpa. Finally, Nam-thar zhi-chol gi gar-chham are performances identical to plays based on well-known biographies. These performances convey the righteous human values that lead to a harmonious life. One of the most popular plays is the mask dance of the Intermediate State [after death].

Tsun-chham or Boe-chham can be easily distinguished from the masked dance costumes. The tsun-chham usually wears a brocade tunic with long and wide sleeves, while the boe-chham performers wear more colorful garments made of brocade and silk. In addition to the central monastic institutions, there are indigenous gar-chhams in communities and private temples and monasteries throughout the country, where community members are usually involved in organizing the event, performing the mask dance and presenting folk dances to safeguard their tradition.

Gar-chham is one of the activities that primarily serve to drive away evil spirits that harm the lives of sentient beings, hinder the spread of the sacred teachings, liberate our souls and lead them to the path of enlightenment. Therefore, out of compassion, the supreme beings manifest themselves in various forms, depending on the character of the obstacles, and bring them to the righteous path. Such activity can be represented by the character of our parents, who sometimes burst into anger and at other times are so loving to their children. The purpose of showing such characters is basically to make us a good and helpful person who ultimately helps to create a harmonious community.