Gai Jatra, a festival of grief and laughter 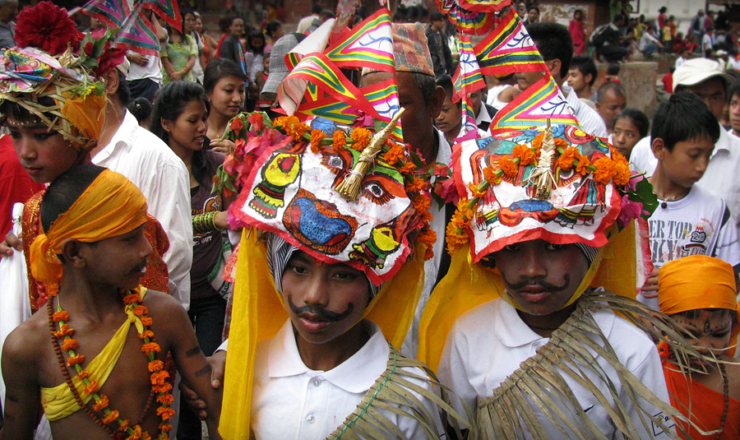 Nepal, a small landlocked country situated between two giant countries, China and India, is a multilingual, multi-cultural and multi-ethnical country. It observes innumerable feasts and festivals throughout the year. These festivals are adhered to different ethnical groups of the country. ‘Newar’ is a local indigenous ethnical group of people mainly residing in Kathmandu valley and also found living in different parts of the country. ‘Newars’ are known for their agricultural farming, business and trade but basically for their unique cultures and feast and festivals. Such feasts and festivals are entrenched firmly to their lives. Among many festivals of such kind, ‘Gai Jatra’ (‘Gai’ means Cow and ‘Jatra’ means street festival. Hence, ‘Gai Jatra’ means Festival of Cow.) which ‘Newars’ have been observing since the unmemorable time.

Each festival has its own cultural, historical, and religious values. ‘Gai Jatra’ has both religious and historical significance in its observance among ‘Newars’. They believe that it is the day the souls of deceased can enter the world of the dead (heaven) without having gone through the suffering of multiple rebirths of different creatures. Cows are believed to guide the soul of the deceased to heaven. And the deceased can cross the ‘Baitarani’ river (Symbolically River of suffering and torments) over to the heaven by grabbing the tail of a cow. So, on the very day of ‘Gai Jatra’, anyone that has had a family member passed away is supposed to lead a calf during the procession. However, since many families cannot afford for a calf, they dress children in cow mask as a substitute, and these children walk in the procession instead.

A story about the festival goes back to the 17th century King Pratap Malla and his queen of Kathmandu. One day their young son died, and the queen was grief-stricken by the unexpected and untimely demise of her beloved son. Many days passed but the queen could not overcome her grief. To restore her happiness and see smiles on her face, and to show his wife that death is a natural part of life, the king called on his people to hold a carnival if someone has died in their family. Many people answered this call which helped the queen by showing that she was not alone in her grief and that all those who participated in the festival had also lost a loved one. Since then, ‘Gai Jatra’ festival has been being celebrated across Nepal by ‘Newars’.

On the day of Gai Jatra, the deceased’s family ceremonially purifies the house in the morning scrubbing the rooms and porch with cow dung. Family members and relatives gathers and prepare for the festival. They need to find a real cow for the cow procession, if not they must bring a young child and dress him up like a cow and the procession marches the square. All people meet in the square, console each other showing death is a natural phenomenon and we are not alone in it.

Despite the solemn theme, Gai Jatra is a festival that is an amalgamation of mourning and celebration. It is a festival of grief and laughter. After the procession has concluded, the rest of the day is filled with street performances of dances, plays, and comedic routines, various funny conversations, jokes, sarcasm, even standup comedy are performed—making it an incredibly light-hearted affair. Considering the means of fun and laughter in the procession in memory of the deceased relatives. ‘Gai Jatra’ seems to call on the bereaved family of the deceased to move forward as a necessary process of life. Gai Jatra is not only limited to this. On the day, people also can freely express their feelings of love and flirting, suffering and agony, and ill-fated lives in the form of songs. People do not hesitate to mock and make sarcastic remarks to the public figures and the rulers on this day. This sort of practice had been observed even during the tyrannical regime of Ranas and Panchayat autocracy when people were strictly forbidden to speak against the rulers on normal days.

In a nutshell, ‘Gai Jatra’ is the only day on which people remember their deceased family members by sending a cow procession, people could joke, satire and enjoy all together. Hence ‘Gai Jatra’ is a festival of not only grief but also the festival of freedom and joy.