From Micronesia to YouTube: Pasifika Renaissance on Documenting Oral Tradition 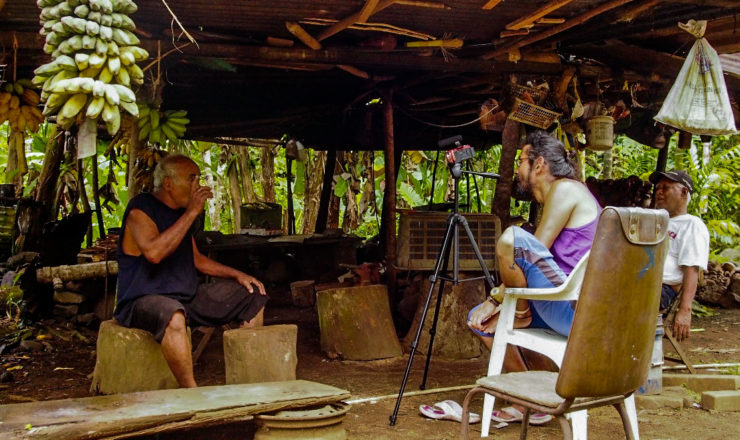 Pasifika Renaissance was established in September 2014 in Japan as an NGO with a mission to preserve and promote cultural and historical heritage in the Pacific Islands. The organization aims to revitalize traditional culture and empower local communities. They work in three main fields: documenting, researching, and teaching about traditional cultures and cultural heritage; providing technical assistance to relevant agencies and organizations; and promoting tourism. You can find out more at the organization’s Facebook page, where they post cultural and historical information, including historical photos and educational materials, and share updates about their activities.

They are currently engaged in a major project to document oral traditions in Pohnpei State. Many older Micronesians have fond childhood memories of listening to stories told by elderly relatives before bed. This practice, however, has been largely lost in Pohnpei due to the spread of new media such as videos and games and the decline of the younger generation’s interest in traditional culture.

To document stories from knowledgeable elders and pass them down to younger generations, Pasifika Renaissance began filming those stories in 2015 and sharing the videos on their YouTube channel with kind permission from the Federated States of Micronesia (FSM) Office of National Archives, Culture and Historic Preservation. This method of documenting and sharing traditional knowledge through online media is rare in the Pacific Islands. However, we believe that it has a great potential for future applications due to the relative ease of use and the internet’s global reach. Our project has been welcomed and supported by traditional chiefs, elders, and other community members, who share our concern that traditional knowledge could be lost.

To date, Pasifika Renaissance has uploaded more than two hundred narrative videos. These stories include legends, traditional tales, historical events, customs, chants and songs from Pohnpei (9 videos), Pingelap (69), Mwoakilloa (11), Sapwuahfik (60), Nukuoro (25), and Kapingamarangi (25) as well as two island groups of Chuuk State: the Mortlock Islands (10) and Namonuito (16). They hope to add more videos from Pohnpei, where they began their work just this year in collaboration with the Division of Historic Preservation and Cultural Affairs, Pohnpei State Department of Land. The YouTube channel has attracted over 240,000 views. Of these views, 78.5 percent are from United States, where one-third of FSM citizens now reside, and an 12 percent of the views come from within the FSM. Pasifica Renaissance’s YouTube channel has now reached 640 views per day, which they believe suggests a keen interest in these stories.

They offer their appreciation to the storytellers and others who have supported this project as well as the generous donors such as the KDDI Foundation in Japan. They hope by watching these videos, people can continue to pass on these stories to their children and younger relatives. If you would like to contribute stories or know someone who is willing to share stories with the organization, please contact them at pasifika.renaissance@gmail.com or by phoning the above Division (320-2652). If you have a knowledgeable elderly relative or friend staying overseas and have the ability to record his or her story via cell phone, tablet, or digital camera, please let them know. Please follow Pasifika Renaissance on Facebook and YouTube channel to receive updates as this project develops. They plan to extend this project to other states in the FSM and other Pacific regions in the near future and hope to collaborate with researchers, government agencies, NGOs, and community members. Please get in touch, and let them know how you can help spread this “renaissance” movement.