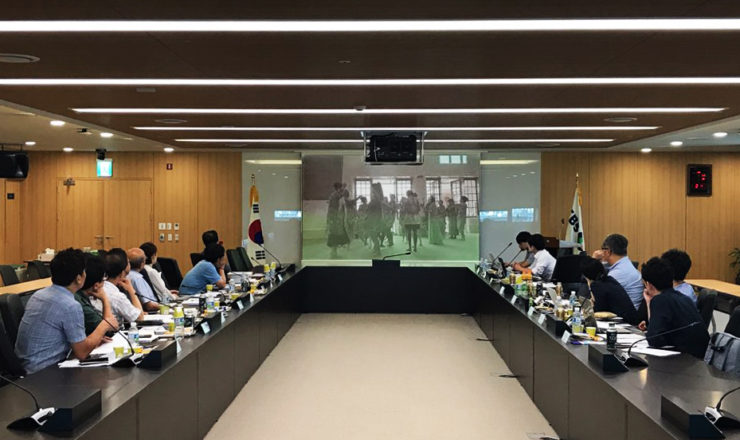 Meeting participants watch a sample video from the project © ICHCAP

Southeast Asia is the second target region of ICHCAP’s larger project of documenting ICH in the Asia-Pacific region, which began in 2015. ICHCAP completed the first part of the project (2015-2017) involving Central Asia; the outcomes of which were exhibited in the Kyrgyz capital of Bishkek in July 2017, and will also be showcased in the upcoming International Intangible Heritage Film Festival later this month in Korea. ICHCAP is now planning to launch the second video documentation project (2017-2019) on Southeast Asian ICH. To ensure efficient progress of the project, ICHCAP held the consultation meeting attended by experts on Southeast Asian countries, video specialists, and members of the project consortium. Seventeen people participated in the meeting, including consultation board members and other stakeholders: Prof. Myung-seok Oh (Anthropology Department at Seoul National University), Prof. Ho Rim Choe (Division of International and Area Studies at Pukyong National University), Prof. Gi-jung Lee (Cultural Anthropology and Archaeology Department at Chonnam National University), Prof. Eun-gyeong Choe (Journalism and Broadcasting Department at Sungkonghoe University), CEO Seong-hun Jeong (BPLUS Pictures), members of EBS who formed the project consortium with ICHCAP, and members of Asia Culture Center.

The meeting was divided into two sessions. The first session was dedicated to the report presentation on Central Asian ICH video documentation project, which was accompanied by video screening. During the second session, consultation was held about the cultural distinctiveness of Southeast Asian countries and video production technologies—exemplary topics requiring an in-depth discussion for a fully grounded project implementation. The participants especially agreed that the project should portray how ICH is being transmitted and how ICH practitioners are living, rather than simply introduce ICH in their original state. Through various examples, they also exchanged thoughts about administrative and cultural characteristics of minority groups in Southeast Asia, which should be considered in the production of videos .

The ICH video production project is expected to make a significant contribution to enhancing the visibility of ICH through media, an important issue that is drawing increasing attention for ICH safeguarding. In this regard, ICHCAP asked the participants for their continuous cooperation and interest to ensure the project’s success. ICHCAP will also continue its effort in collaborating with governments and relevant communities in the project’s target countries.

The outcomes of the project will be widely utilized as materials for public events, education, and research.