Ever wondered New year celebration in the Himalayas? 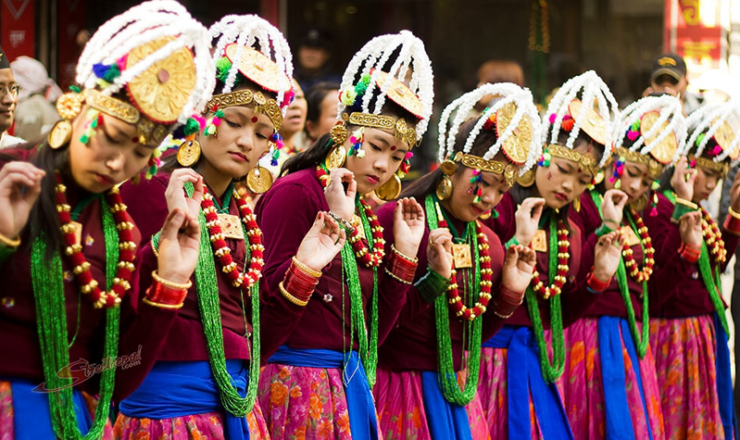 Nepal is a country of Himalayas boasting the world’s tallest peak, Mt. Everest. Here different caste people live in harmony. Each caste has its language and culture. So, no wonder about having its own New Year as well. Before jumping towards the topic, I would like to introduce the people of the Himalayas. Sherpas, Gurungs, Tamangs, etc. are the biggest ethnic groups that live nearby the Himalayas. Sherpas, who are famous as mountaineers, live in the lap of mountains. Tamangs, Gurungs, etc. are other ethnicities that live in the mountain as well as hilly areas of Nepal. Apart from owning the beautiful snow-clad mountains, these ethnic groups also have their own culture and tradition which is celebrated by the whole Nepalese.

On Losar day or New Year, all people of the community wear their traditional costumes and gather in the square and celebrate it merrily. They sing their traditional songs, dance in their traditional style. They even celebrate by holding competitions for fun. Like all other festivals we celebrate, Losar is also a festival of family and relatives gathering. On this very day, traditional food is served to all guests who visit their homes. They even perform ritual activities to get relief from bad lucks and they also visit the Buddhist temple and chant their prayer for the prosperity of their family. During the festival, people forget the past thing and forgive each other by exchanging gifts. So, all can have their fresh new start with social harmony and with a new hope.

This day is a very important day for the young generations as they are learning not only their culture but also songs and dances too. Songs and dances are taught orally at the scene itself, and children learn them. Hence there is no doubt that Losar is a living heritage, that is transmitted from one generation to another generation.

But due to the rapid change of communities in Nepal, the celebration of Losar is deducting day by day. Young people are moving to the big cities and developed countries. New generations are not as involved as they used to be before. Therefore, to protect their culture and tradition, these ethnic group peoples are doing rallies in Katmandu on Losar day. All different caste people, who celebrate Losar, gather in the rally by wearing their traditional dress performing their cultural songs and dances, and enjoying the local food. They enjoy the whole day festival by doing cultural rallies, singing and dancing as well as making new friends.

To sum it up, Losar is more than a festival of New year. It is an Intangible Cultural Heritage. This festival brings new hope to the people who celebrate it. It is directly related to the lifestyle of the community as they gather and celebrated it together. But more than that it is a living heritage when they are practicing their songs and dances orally and teaching to the coming new generations. Since the Losar festival, as well as the songs and dances in the festivals, are not recorded, it may extinct at any time. Therefore, with its cultural significance, it is truly a Cultural Heritage of Nepal that should be safeguarded as soon as possible.