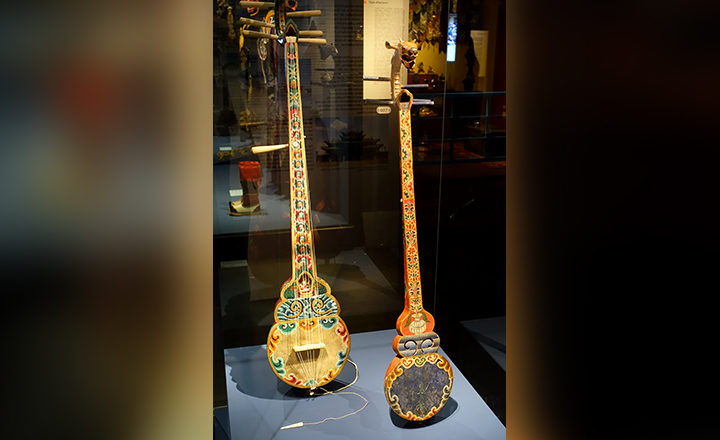 The Bhutanese lute, the drangyen, is the oldest and most well-known instrument of Bhutan. The word drangyen itself roughly translates to “hear the melody,” where dra means “melody,” and ngyen means “listen.” The drangyen is often used in religious festivals accompanied by folk dances and stories. Some date back to the eighth century CE when Buddhism was introduced to Bhutan.

The instrument is made from wood (preferably from cypress trees), leather, and yak bone and is about one meter long. Structurally, the top or head is intricately shaped like a sea monster to scare away evil spirits that may be attracted to the beautiful music that the instrument makes. The head stands upon a long fretless neck that attaches to a rounded body that pictures the goddess of music. The seven strings, which are made from the bark fiber of the jute tree, are played with a triangular plectrum made of wood or bone.

Kheng Sonam Dorji is a master folk musician of Bhutan. He has assembled a series of videos that show how the drangyen is made and how to play it. They are available in several lessons on YouTube. Visit the following links to find out more about the drangyen.

Enjoy learning about the drangyen from a master artist, and consider subscribing to the Druk Folk Musicians – YouTube channel.