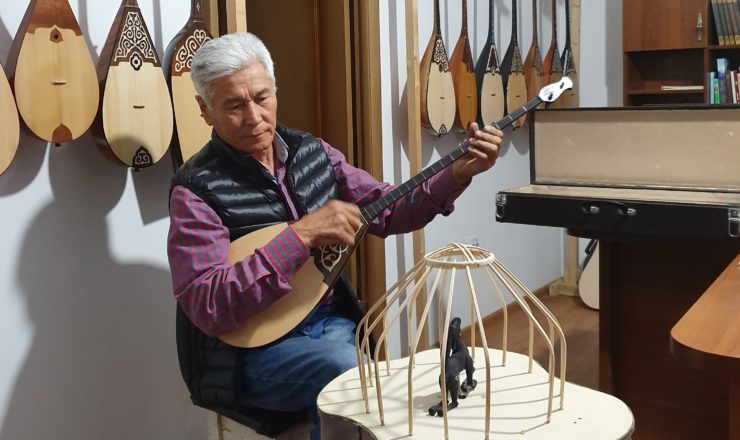 As part of my efforts to safeguard ICH along the Silk Road, including Central Asia, I had opportunities to meet with dombra and ordeke practitioners and experts. In brief, the dombra is a primary stringed instrument of Kazakhstan and orteke combines dombra playing with a puppetry performance.

Orteke, Traditional Kazakh Puppet-Musical Performing Art
Orteke, which literally means “mountain goat,” is the name of an indigenous Kazakh performing art and combines theater, music, and puppetry. A flexible a wooden figure of a mountain goat is placed on a drum called a dauylpaz. The expressive puppet figure, called teke (goat), appears to come to life as the master starts playing the drum. The figure makes funny dance movements in time with the rhythm of the music being played. It is also said that the orteke figure once came in different shapes and sizes that were created individually, each with a different number of moving limbs, depending on which kyu was performed.

The orteke’s virtuosic movements form the basis of the art form along with the rhythm of the dombra and other musical instruments. Originally, the orteke had a simple design and performance elements that later became more complex with more details appearing and the addition of the dombra. All constructed parts—legs, tail, head, joints, etc.—are made separately so that every movement can be natural and attractive.

Dr.Evfrat Imanbek, social anthropologist, explains that orteke attracts young children. The orteke tradition has been transmitted through storytelling and is interesting and precious for the Kazakh people. There is a need to further disseminate orteke at an international level to promote Kazakh culture.

Meeting with the Master Mr. Zholaushy Turduqulov
At the Musical Instrument Museum in Almaty City, I learned about the history and development of musical instruments, including the Kazakh dombra. I also visited the workshop of Mr. Zholaushy Turduqulov, a well-known dombra and orteke master. He has a fifty-year career in making and performing dombra and orteke. I asked him what the dombra means to him, and he said dombra means life in and of itself for him. He added that a genuine Kazakh must play a dombra. Fortunately, for the last several years, the market demand for the dombra has been increasing. In other words, the craftwork of making a dombra is economically profitable.

I expect that dombra and orteke traditions of the Kazakh people will have a positive role in contributing to sustainable development of Kazakhstan society thanks to devotion of ICH practitioners such as Zholauaushy and participation and support from the public.
Visit https://www.unesco-ichcap.org/eng/ek/sub2017_4/sub2.php to see dombra and orteke performances as well as other Kazakh traditions.