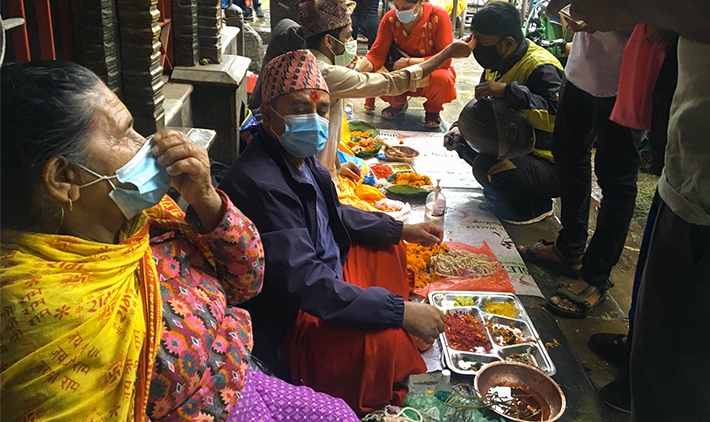 Nepal is a diverse country, which is reflected in the rituals, traditional festivals and practices. Even the same day is celebrated by different ethnic communities with different practices and even name it differently. One of the examples is the celebration of full moon on Shrawan Shukla, which fell on 22nd August this year. Different communities within Nepal celebrated this day in different ways.

For the shamans of ethnic communites: Tamang, Magar, Rai, Limbu, and Gurung, who are commonly known as Jhakris, Shrawan Shukla’s full moon day is an important day. They perform special rituals in the various temples. In the sacred sites like Gosaikunda Lake in the mountain, there is an annual fair. Shamans trek to those sites and perform rituals along with singing and dancing the whole night. Also the junior shamans get graduated from the senior shaman after special rituals. Besides shaman many trek for days to reach those sites for this day and watch the shamans perform and pay homage to the site.

Brahmins celebrate this day as Janai Purnima. On this day they change the sacred thread called Janai, which they wear on their body. People are seen taking bath in the holy rivers and lakes, after performing the rituals and changing sacred thread. Many Hindus also tie a sacred thread on their wrist with the Brahmin priest. Many priests are seen within the premises of different temples (either Hindu or Buddhist), tying the threads on the wrists and putting tika (mixture of vermilion and uncooked rice) on the forehead in exchange of some offerings.

Madeshi communites of Nepal celebrate this day as a Rakshaya Bandahan or Rakhi. This is the special day for brothers and sisters as sisters tie a sacred thread with decorations on the wrist of brothers. Brothers showers sisters with gifts in return. This is a beautiful ritual to strengthen the bond between siblings and celebrate. Brothers and sisters travel a long distance to reach the place of their brothers/ sisters to celebrate this day. Rakhi is also celebrated in most of the communiites in India as well. Now a lot of non-Madeshi communites in Nepal are also celebrating this ritual of tying rakhi on brother’s wrist. This tradition is now crossing the ethnic and communal boundaries, and setting the example of cultural acceptance.

Likewise, Newa communities of Nepal celebrate this day as Kwati Punhi. On this day nine different beans soup are eaten known as Kwati, which literally translates as hot liquid. Also the offerings of these beans mixtures to different deities and temples are done. Traditionally the day to eat protein rich food was set after the laborious work of monsoon in paddy field.

The same day Newa community also performs the rituals called Byā jā nakegu, the ritual to feed rice and beans to frogs. This is an ancient farming tradition, which is still continued in the outskirts of cities of Kathmandu. Farmers believe frogs help in bringing rain that is important for paddy planation. Still many farmers are seen will small portions of beans and cooked rice in small green leaves and leaving in the field.

This day not only reflects the cultural and ethnic diversity in Nepal but also deep-rooted connection of nature, people and practices. Either be it a Shaman ritual or Hindu rituals of changing sacred thread, all have associations with nature. Not just the continuity of the practices but we also need to teach the underlying message of nature conservation and suitability to the younger generations.